MANILA, Philippines (3rd UPDATE) – Tropical Depression Maring made landfall in Mauban, Quezon at 9 am on Tuesday, September 12, and then headed for the Laguna-Manila area.

In a bulletin issued 11 am on Tuesday, state weather bureau PAGASA said Maring was already in the vicinity of Laguna, moving west northwest at 15 kilometers per hour (km/h).

In the afternoon, the tropical depression is expected to cross Metro Manila – which has already been experiencing heavy rain since Monday night, September 11.

Due to the heavy rain, Tuesday classes were suspended in the entire Metro Manila as well as various provinces. Several areas were flooded.

Malacañang also suspended work in government offices in Metro Manila, Calabarzon, and Central Luzon. The Supreme Court suspended work in courts in the same 3 regions as well, while there is no trading at the Philippine Stock Exchange.

As it hit land, the tropical depression had maximum winds of 60 km/h and gustiness of up to 100 km/h.

Signal number 1 is raised in the following areas due to Maring: 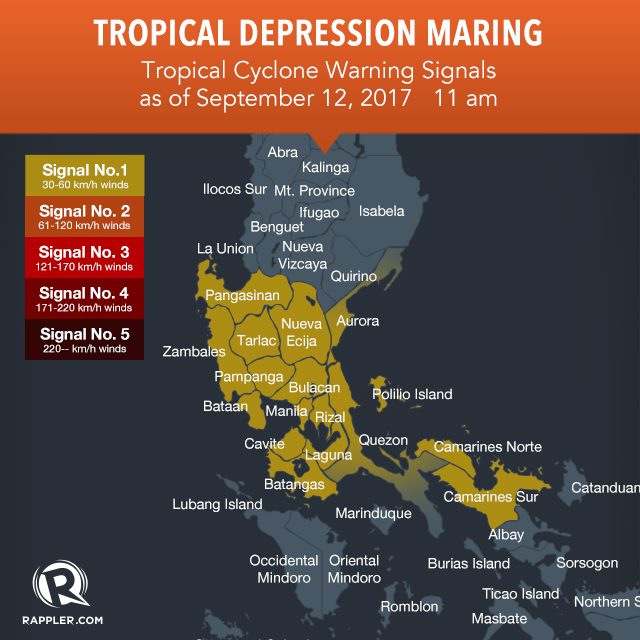 The tropical depression will continue to bring moderate to heavy rain to the regions of Metro Manila, Central Luzon, Bicol, Calabarzon, and Mimaropa, as well as the province of Pangasinan. Residents are advised to stay on alert for more floods or possible landslides.

PAGASA said the rain is expected to continue until Wednesday morning, September 13, while Maring is still over land. Below is another look at the track of the tropical depression, from privately run WeatherPhilippines Foundation. Its forecast also shows Maring passing through Metro Manila on Tuesday afternoon. PAGASA also continues to monitor Typhoon Lannie (Talim), which is not directly affecting the country.

Lannie is already 865 kilometers east of Basco, Batanes, moving west northwest toward the Batanes-Taiwan area at a slightly slower 24 km/h from the previous 26 km/h.

The typhoon continues to have maximum winds of 120 km/h and gustiness of up to 145 km/h.