Facebook Twitter Copy URL
Copied
In just a 24-hour period, Guiuan in Eastern Samar gets 780 mm of rain. Its normal rainfall for an entire month is just 440 mm.

What’s making matters worse – Urduja has remained in a “quasi-stationary” state, which means it is barely moving and it is just lingering in Eastern Visayas. Much faster tropical cyclones are better since their effects on a particular area would not be as severe.

In a news briefing at 5 pm on Friday, December 15, PAGASA forecaster Aldczar Aurelio said Urduja is hardly moving because of the effects of the northeast monsoon and the tail-end of a cold front.

So far, Urduja remains 240 kilometers east of Borongan, Eastern Samar, inching northwest at just 5 kilometers per hour (km/h). It continues to have maximum winds of 75 km/h and gustiness of up to 90 km/h. (READ: EXPLAINER: How tropical cyclones form)

Due to Urduja’s extremely slow movement, its expected landfall in the Eastern Samar-Northern Samar area was pushed back to either Saturday morning or afternoon, December 16.

Signal number 1, meanwhile, is still up in:

These were the top 5 areas which received the most rainfall in terms of millimeters (mm), from 8 am of Thursday, December 14, to 8 am of Friday, or a 24-hour period: 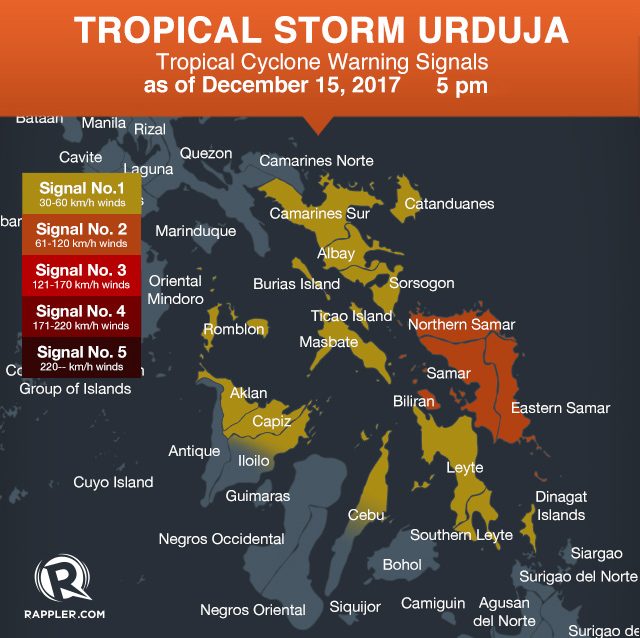 Floods and landslides have been reported due to Urduja.

PAGASA said residents of provinces in the tropical storm’s path “must undertake appropriate measures against flooding and landslides and coordinate with their respective local government and disaster risk reduction and management offices.” (LOOK: Bicol braces for Urduja)

Sea travel also remains risky in the eastern seaboards of Bicol and the Visayas. Thousands of passengers were stranded in various ports on Thursday.

Classes were suspended in some areas on Friday as well. (READ: #WalangPasok: Class suspensions, Friday, December 15)

The Department of Social Welfare and Development (DSWD) has already activated the government’s national disaster response operation to assist areas affected by the tropical storm.

Based on its forecast track, Urduja will eventually get downgraded back to a tropical depression by Sunday, December 17, and then into a low pressure area by Wednesday, December 20 – still inside the Philippine Area of Responsibility (PAR).