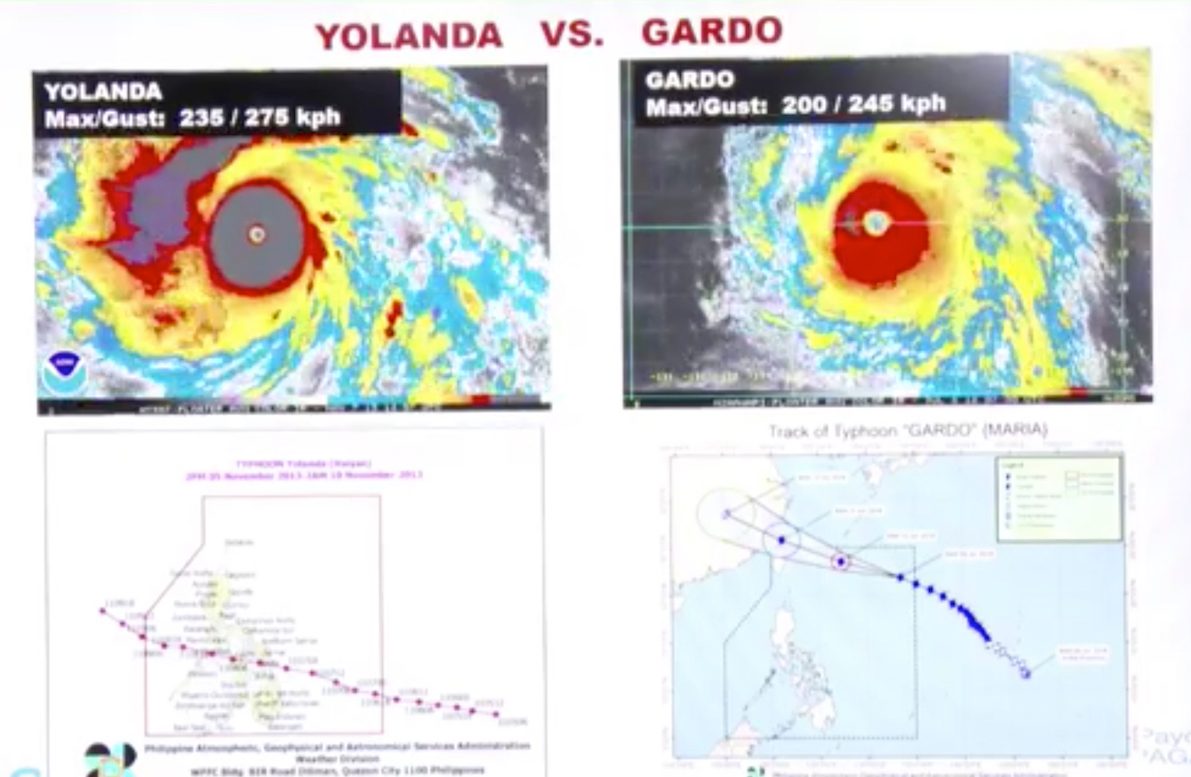 Here’s how they differ, according to PAGASA Weather Division chief Esperanza Cayanan:

(If you look at the circulation of Yolanda compared to Gardo, it covered a much wider area and it brought stronger winds and heavier rainfall.)

(Yolanda’s track was lower, it really hit our country…. But Gardo will just stay in the corner of the Philippine Area of Responsibility, so it’s far from land. We won’t directly feel the effects of Gardo’s winds, so we are just preparing for the rainfall [from the enhanced southwest monsoon].)

(The JTWC has different guidelines for classifying winds, so theirs will really be stronger. You’re comparing, “Why is the typhoon stronger in the US, and weaker here in the Philippines?” It’s because the JTWC uses the one-minute average for wind classification, unlike here in PAGASA and for other typhoon committee members in Asia – what we use officially is the 10-minute average, that’s why there will really be a discrepancy.)

PAGASA Deputy Administrator for Administrative and Engineering Services Catalino Davis reiterated that Gardo is only a typhoon based on their standards. A super typhoon, for PAGASA, has maximum winds exceeding 220 km/h. (READ: FAST FACTS: Tropical cyclones, rainfall advisories)

(Of course, Gardo’s maximum winds have not exceeded 220 [km/h], so we can’t insist it’s a super typhoon. We’re following our official classification.)

PAGASA also emphasized that it is the Philippines’ official weather authority.

(PAGASA is the one officially mandated when it comes to providing advisories, warnings, and forecasts for the Philippine Area of Responsibility. We’re a member of the World Meteorological Organization, that’s why this is our mandate and the data that we give are considered the official data.)