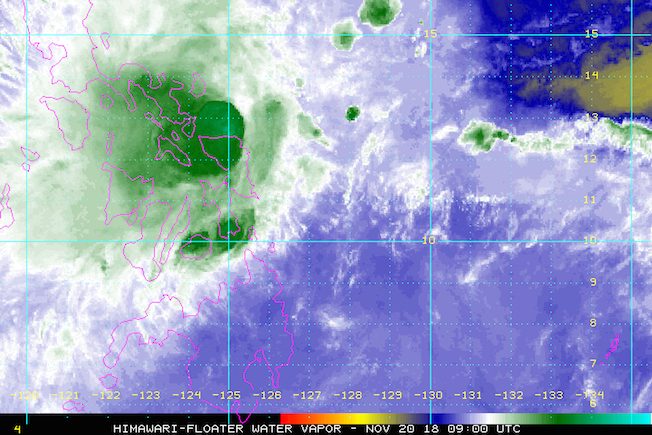 Facebook Twitter Copy URL
Copied
Samuel remains on track to make landfall on Tuesday evening, November 20, but an estimated time has yet to be given

MANILA, Philippines – Tropical Depression Samuel was approaching the Leyte Gulf late Tuesday afternoon, November 20, ahead of its expected landfall in the evening.

The tropical depression is still moving west northwest at 20 kilometers per hour (km/h).

It is expected to make landfall “in the area between the southern portion of Eastern Samar and Dinagat Islands” on Tuesday evening.

But PAGASA Weather Specialist Aldczar Aurelio said the exact time of landfall remains unclear, since Samuel is moving slowly and, unlike a typhoon, does not have a clear eye or center.

Samuel has maintained its strength, with maximum winds of 55 km/h and gustiness of up to 65 km/h. Though it has not yet intensified into a tropical storm, it still poses a threat to parts of the country. If Samuel maintains its speed, it would exit the Philippine Area of Responsibility on Thursday afternoon or evening, November 22. Meanwhile, the northeast monsoon or hanging amihan will still bring isolated light rains to the Ilocos Region, Cordillera Administrative Region, Cagayan Valley, and Central Luzon on Wednesday, November 21. But PAGASA said there will be “no significant impact.”