Rainy December 30 in Luzon due to LPA, cold front 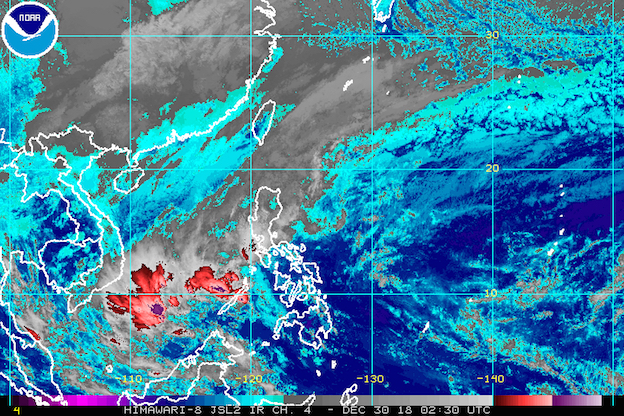 MANILA, Philippines – The low pressure area (LPA) which used to be Tropical Depression Usman and the tail-end of a cold front are still bringing rain on Sunday, December 30.

In a bulletin released past 11 am on Sunday, the Philippine Atmospheric, Geophysical, and Astronomical Services Administration (PAGASA) said the LPA is already 340 kilometers west southwest of Puerto Princesa City, Palawan.

As for the cold front, it forms when an advancing cold air mass displaces warmer air in its path, causing the displaced warm air to rise, which then leads to the formation of clouds and precipitation. (READ: FAST FACTS: Tropical cyclones, rainfall advisories)

The LPA and the tail-end of a cold front combined are triggering moderate to heavy rain in Bicol, Cagayan, Isabela, Aurora, Quezon, Oriental Mindoro, Occidental Mindoro, Marinduque, Romblon, and the northern part of Palawan, including the Calamian and Cuyo groups of islands.

PAGASA advised all areas affected by the LPA and the tail-end of a cold front to stay on alert for flash floods and landslides. Usman had already triggered floods and landslides, and also caused damage. (READ: Tribal leader seeks help for displaced Mamanwa families in Samar)

The rest of the country will have generally good weather on Sunday, with only isolated rainshowers or thunderstorms.

Meanwhile, due to the surge of the northeast monsoon or hanging amihan, sea travel remains risky in the seaboards of Luzon and in the eastern seaboard of the Visayas.

A gale warning was issued at 5 am on Sunday for the following areas: