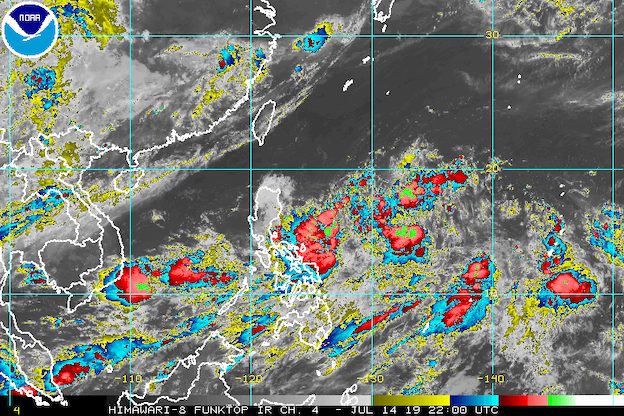 MANILA, Philippines – The low pressure area (LPA) inside the Philippine Area of Responsibility (PAR) developed into a tropical depression at 2 am on Monday, July 15. It has been given the local name Falcon.

It has maximum winds of 45 km/h and gustiness of up to 60 km/h. It could later develop into a tropical storm while crossing the Babuyan Channel. (READ: FAST FACTS: Tropical cyclones, rainfall advisories)

Falcon remains far from land, so there are no areas under tropical cyclone wind signals yet. But Signal No. 1 could be raised as early as Tuesday, July 16, to give residents lead time of 36 hours to prepare.

There is also possibility of Falcon making landfall in Cagayan on Wednesday, July 17, according to PAGASA Weather Specialist Ariel Rojas.

In the meantime, the trough or extension of Falcon will already bring scattered rainshowers and thunderstorms to Bicol and Eastern Visayas on Monday.

The tropical depression is also enhancing the southwest monsoon or hanging habagat.

The enhanced southwest monsoon will trigger scattered rainshowers and thunderstorms in Mimaropa, the rest of the Visayas, and Mindanao on Monday as well.

Then on Tuesday, light to heavy monsoon rain is expected in Mimaropa, Western Visayas, the Zamboanga Peninsula, and Sulu.

On Wednesday, the combined effects of Falcon and the southwest monsoon will mean moderate to heavy rain for Metro Manila, the Ilocos Region, the Cordillera Administrative Region, Cagayan Valley, Central Luzon, Mimaropa, Calabarzon, and Western Visayas.

Residents of areas affected by Falcon and the southwest monsoon should be on alert for possible flash floods and landslides.

PAGASA also advised fishermen and those with small seacraft not to venture out into the eastern seaboard of Mindanao due to rough to very rough seas caused by the southwest monsoon.

Falcon is expected to leave PAR on Thursday, July 18.