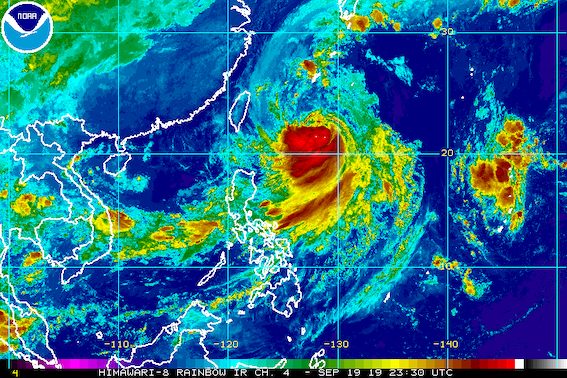 Facebook Twitter Copy URL
Copied
The trough or extension of Tropical Storm Nimfa (Tapah) is no longer seen to bring rain on Friday, September 20, but the southwest monsoon is still causing rain

In a briefing at 5 am on Friday, the Philippine Atmospheric, Geophysical, and Astronomical Services Administration (PAGASA) said Nimfa is already 580 kilometers east northeast of Basco, Batanes.

The tropical storm is now moving west at 25 kilometers per hour (km/h) from the previous 15 km/h.

Nimfa is not expected to make landfall in the country, and there are no areas under tropical cyclone wind signals. Its trough or extension is no longer seen to bring rain on Friday as well.

What will continue to trigger rain in Luzon is the southwest monsoon.

Travel also remains risky in the seaboards of Northern Luzon and Central Luzon as well as the eastern seaboard of Southern Luzon due to rough to very rough sea conditions.