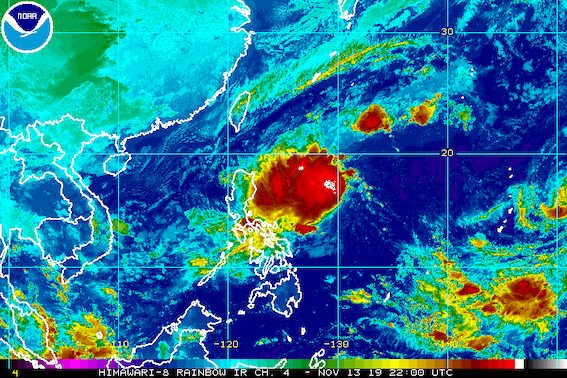 MANILA, Philippines – Tropical Storm Ramon (Kalmaegi) slightly slowed down before dawn on Thursday, November 14, as it continued heading for land.

In a briefing at 5 am on Thursday, the Philippine Atmospheric, Geophysical, and Astronomical Services Administration (PAGASA) said Ramon is now 355 kilometers east of Legazpi City, Albay, or 300 kilometers east of Virac, Catanduanes.

It is moving west northwest at only 10 kilometers per hour (km/h) from the previous 15 km/h.

The tropical storm still has maximum winds of 65 km/h and gustiness of up to 80 km/h.

Ramon is also causing rain in parts of Luzon. Here is what to expect for the next 48 hours:

Since Ramon slowed down, it is taking longer to reach land. Its latest forecast track now shows it could make landfall in the Isabela-Cagayan area between Saturday evening, November 16, and early Sunday, November 17.