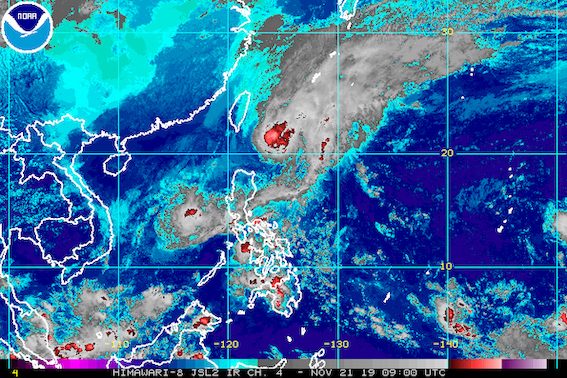 In a bulletin issued 5 pm on Thursday, the Philippine Atmospheric, Geophysical, and Astronomical Services Administration (PAGASA) said Sarah now has maximum winds of 110 kilometers per hour (km/h) from the previous 100 km/h and gustiness of up to 135 km/h from the previous 125 km/h.

The severe tropical storm is already 255 kilometers east of Basco, Batanes. It is moving northwest at the same slow pace of 10 km/h.

Signal No. 1 is still raised in Batanes, which means winds of 30 km/h to 60 km/h are expected in the province.

PAGASA added that gusty conditions will persist in the northern and western parts of Northern Luzon, especially in coastal and mountainous areas, due to the surge of the northeast monsoon or hanging amihan.

Sarah is not expected to make landfall in the Philippines. But its trough or extension will still bring light to moderate rain to these areas on Thursday night:

It is seen to leave the Philippine Area of Responsibility (PAR) on Saturday morning. Meanwhile, the low pressure area (LPA) which used to be Ramon (Kalmaegi) is already 400 kilometers west southwest of Subic, Zambales. Ramon had made landfall as a typhoon in Santa Ana, Cagayan, at 12:20 am on Wednesday, November 20, then gradually weakened.

PAGASA Weather Specialist Benison Estareja said the trough of the LPA is affecting the provinces of Zambales and Bataan. But the good news is the LPA is expected to leave PAR within 24 hours.