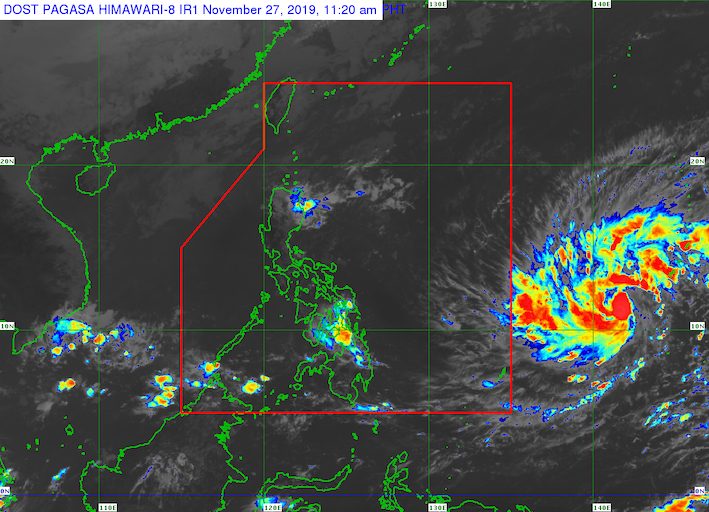 Facebook Twitter Copy URL
Copied
Kammuri, a tropical storm outside the Philippine Area of Responsibility as of Wednesday morning, November 27, could enter as a typhoon on Sunday morning, December 1

MANILA, Philippines – The state weather bureau is monitoring a tropical storm outside the Philippine Area of Responsibility (PAR), with the international name Kammuri.

The name was contributed by Japan and refers to the Corona Borealis constellation.

In a bulletin issued 11 am on Wednesday, November 27, the Philippine Atmospheric, Geophysical, and Astronomical Services Administration (PAGASA) said Tropical Storm Kammuri is 1,755 kilometers east of the Visayas.

It is moving west at 25 kilometers per hour (km/h).

At the moment, Kammuri has maximum winds of 85 km/h and gustiness of up to 105 km/h. But it is expected to eventually intensify into a severe tropical storm and then into a typhoon. (READ: FAST FACTS: Tropical cyclones, rainfall advisories)

Kammuri will likely be a typhoon by the time it enters PAR, possibly on Sunday morning, December 1, the day after the formal opening of the 2019 Southeast Asian (SEA) Games which the Philippines is hosting.

Since Kammuri remains too far, its track is still uncertain. PAGASA is expected to release more detailed forecasts, especially on the areas to be affected, as the potential typhoon nears.

The SEA Games events are all in Luzon, particularly in Metro Manila; Clark, Pampanga; Subic, Zambales; and a number of other areas in the island region. Thousands of athletes, team staff, and sports officials from Southeast Asia are participating.