MANILA, Philippines – The track of Typhoon Kammuri, which will be locally named Tisoy once it enters the Philippine Area of Responsibility (PAR), may be similar to that of Typhoon Glenda (Rammasun) in 2014 and Typhoon Reming (Durian) in 2006.

This is according to the Philippine Atmospheric, Geophysical, and Astronomical Services Administration (PAGASA).

Kammuri or the potential Tisoy is expected to enter PAR between Saturday, November 30, and Sunday, December 1.

Landfall is possible in the Bicol area on Tuesday, December 3. Areas seen to be affected aside from Bicol are Central Luzon, Southern Luzon, and Metro Manila.

Glenda in 2014 and Reming in 2006 had nearly the same track, said PAGASA Senior Weather Specialist Chris Perez in a press briefing on Friday, November 29.

How were Glenda and Reming like? Perez said Glenda, which hit mid-July 2014, made landfall as a typhoon with maximum winds of 150 kilometers per hour (km/h) and gustiness of up to 180 km/h. It made landfall in the province of Albay, located in the region of Bicol. 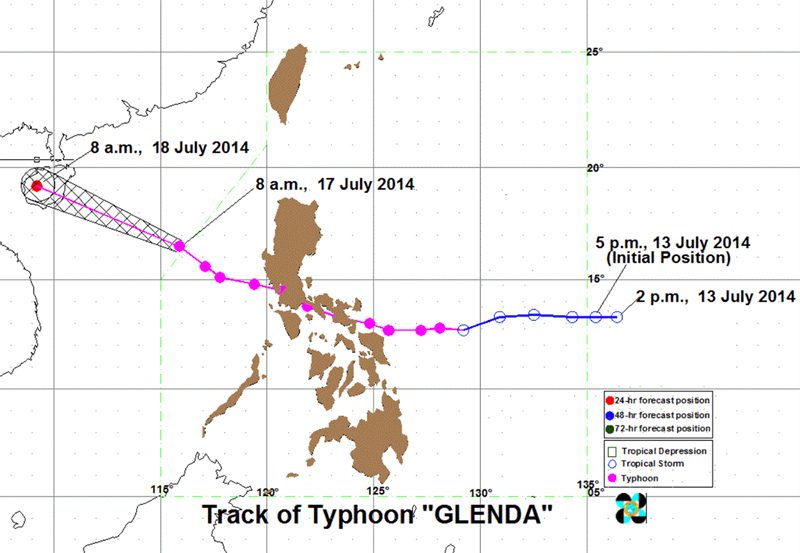 Meanwhile, Reming, which struck late November to early December 2006, had maximum winds of 190 km/h and gustiness of up to 225 km/h. It made landfall in the province of Catanduanes, also in Bicol. As of Friday afternoon, Kammuri had maximum winds of 140 km/h and gustiness of up to 170 km/h.

It is expected to gain more strength since it remains over water, but PAGASA said it is less likely to become a super typhoon at the moment. What should Filipinos do? Perez advised local government units, especially disaster risk reduction and management officials, to review how Glenda and Reming affected their areas.

(These two, we can use them to have a pattern for disaster preparedness and mitigation…. The local officials can double-check which areas were severely affected. Have there been any changes in terms of your urban setting or rural setting?)

(They should identify the areas prone to flash floods and landslides as early as today, so that when the typhoon hits…we already have a pattern for preparedness.)

Kammuri or the potential Tisoy would be the Philippines’ 20th tropical cyclone for 2019. (WATCH: What can you do to prepare for disasters?) – Rappler.com