Over 30 areas under Signal Nos. 1, 2 due to Typhoon Tisoy 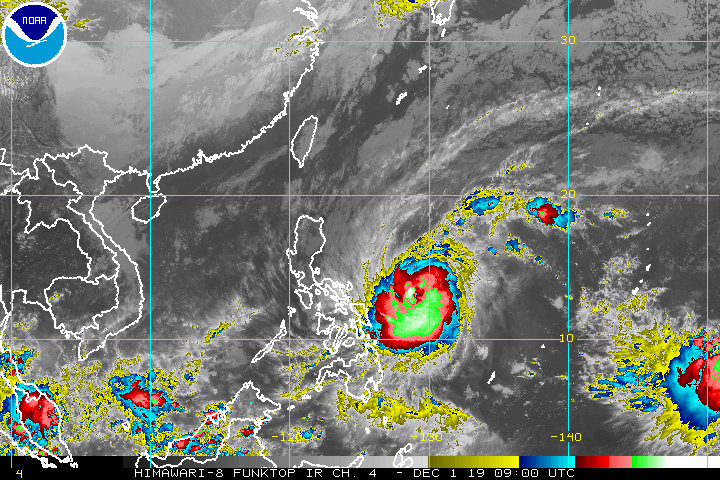 MANILA, Philippines – Even more areas were placed under tropical cyclone wind signals due to the powerful Typhoon Tisoy (Kammuri) on Sunday afternoon, December 1, including the capital region of Metro Manila.

In a press briefing past 5 pm on Sunday, the Philippine Atmospheric, Geophysical, and Astronomical Services Administration (PAGASA) said Tisoy is already 595 kilometers east of Virac, Catanduanes.

It is now moving west at a slightly slower 20 kilometers per hour (km/h) from the previous 25 km/h.

The typhoon maintained its strength, with maximum winds of 140 km/h and gustiness of up to 170 km/h. (READ: FAST FACTS: Tropical cyclones, rainfall advisories)

Here is the latest list of areas under tropical cyclone wind signals, mostly in Luzon and the Visayas but with a couple in Mindanao: 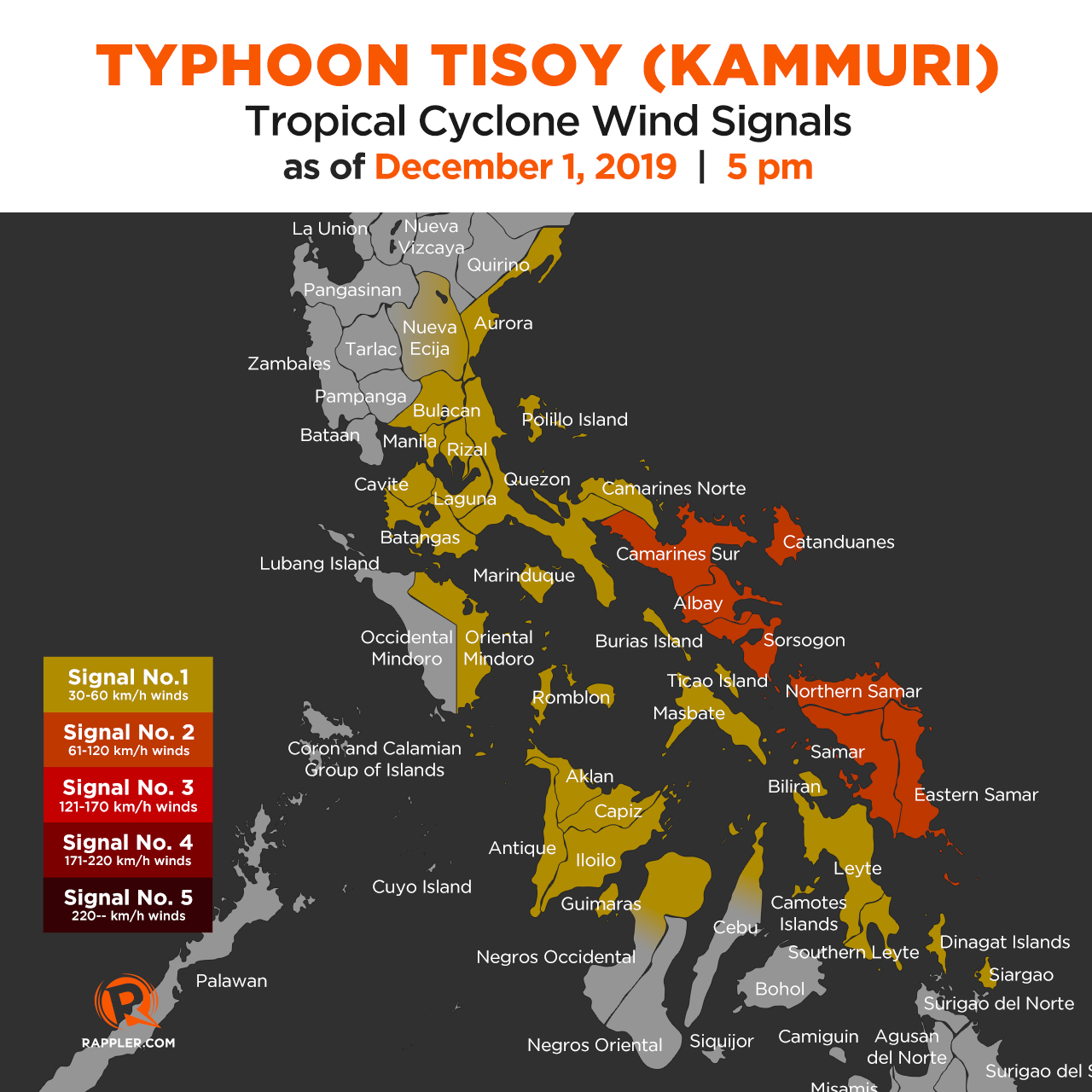 Tisoy will also bring rain starting Monday, with Bicol to be most affected. Below is PAGASA’s latest rainfall outlook:

PAGASA warned that the rain could trigger flash floods and landslides in areas in the typhoon’s path. These include areas where events of the 2019 Southeast Asian Games are set, particularly Metro Manila, Zambales, and Pampanga.

Ahead of Tisoy’s landfall, thousands of people have fled their homes.

Classes have also been suspended in some areas for Monday. (READ: #WalangPasok: Class suspensions, Monday, December 2, 2019)

Based on its latest forecast track, Tisoy is expected to leave the Philippine Area of Responsibility on Thursday afternoon, December 5. 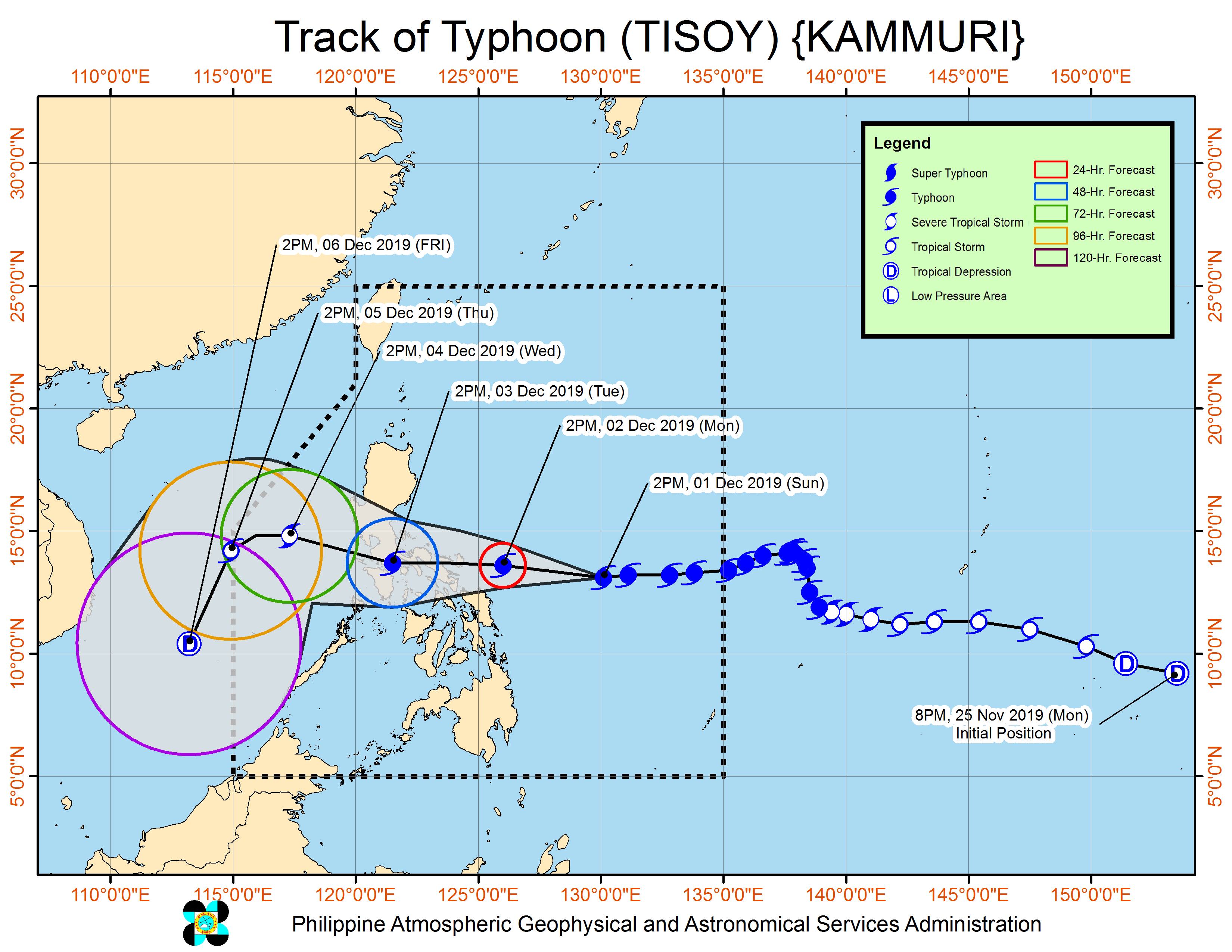