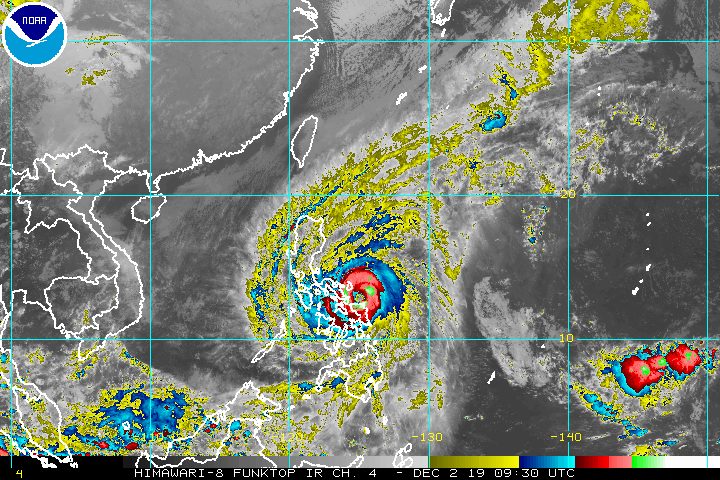 This is not yet the typhoon’s landfall, which happens when the eye or center of the typhoon hits land.

In a briefing past 5 pm on Monday, the Philippine Atmospheric, Geophysical, and Astronomical Services Administration (PAGASA) said Tisoy is already 155 kilometers east of Juban, Sorsogon.

It slightly slowed down again, moving west at 15 kilometers per hour (km/h) from the previous 20 km/h.

The southern eyewall of Tisoy, according to PAGASA, is now bringing intense rainfall and violent winds to Northern Samar. The eyewall will also hit Sorsogon, Albay, Catanduanes, and Camarines Sur in the next 3 hours.

Tisoy is expected to make landfall in the Albay-Sorsogon area between Monday evening and early Tuesday morning, December 3. (READ: Typhoon Kammuri track may be like Glenda in 2014, Reming in 2006)

Below is the latest list of tropical cyclone wind signals.

Here is the latest rainfall outlook for Tisoy:

Between Tuesday morning and evening, December 3

PAGASA again emphasized that flash floods and landslides are possible, especially in low-lying communities and in mountainous areas.