Dec 3, 2019 6:30 AM PHT
Acor Arceo
Facebook Twitter Copy URL
Copied
While Typhoon Tisoy (Kammuri) is slightly weaker, the peak of rain from the typhoon is still expected on Tuesday, December 3 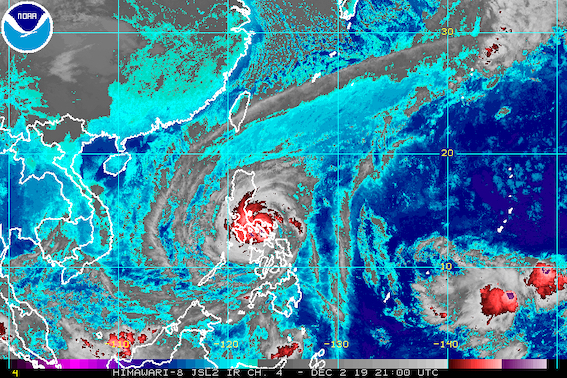 MANILA, Philippines – Typhoon Tisoy (Kammuri) slightly weakened as it continued to cross landmass before dawn on Tuesday, December 3, but it is still expected to dump more rain in parts of Luzon and the Visayas.

In a bulletin issued past 5 am on Tuesday, the Philippine Atmospheric, Geophysical, and Astronomical Services Administration (PAGASA) said Tisoy is already in the vicinity of the municipality of San Pascual in Burias Island, which is in the province of Masbate.

It is again moving at a slightly faster 20 kilometers per hour (km/h) from its speed of 15 km/h when it hit land.

Tisoy had made landfall in Gubat, Sorsogon, at 11 pm on Monday, December 2. Tropical cyclones commonly weaken while crossing land, though in Tisoy’s case, it remains strong nevertheless since it is still a typhoon.

Tisoy now has maximum winds of 155 km/h from 175 km/h at the time of its landfall, and gustiness of up to 235 km/h from 240 km/h. (READ: FAST FACTS: Tropical cyclones, rainfall advisories)

PAGASA said Tisoy’s eyewall is currently bringing violent winds and intense rainfall to Camarines Norte, Camarines Sur, Albay, and Masbate. It will also affect the southern part of Quezon, Romblon, and Marinduque in the next 3 hours.

The World Meteorological Organization defines the eyewall as “an organized band or ring of cumulonimbus clouds that surround the eye” of a tropical cyclone.

Below is the newest list of areas under tropical cyclone wind signals. Areas in Mindanao – Dinagat Islands and Siargao Island – are no longer included. 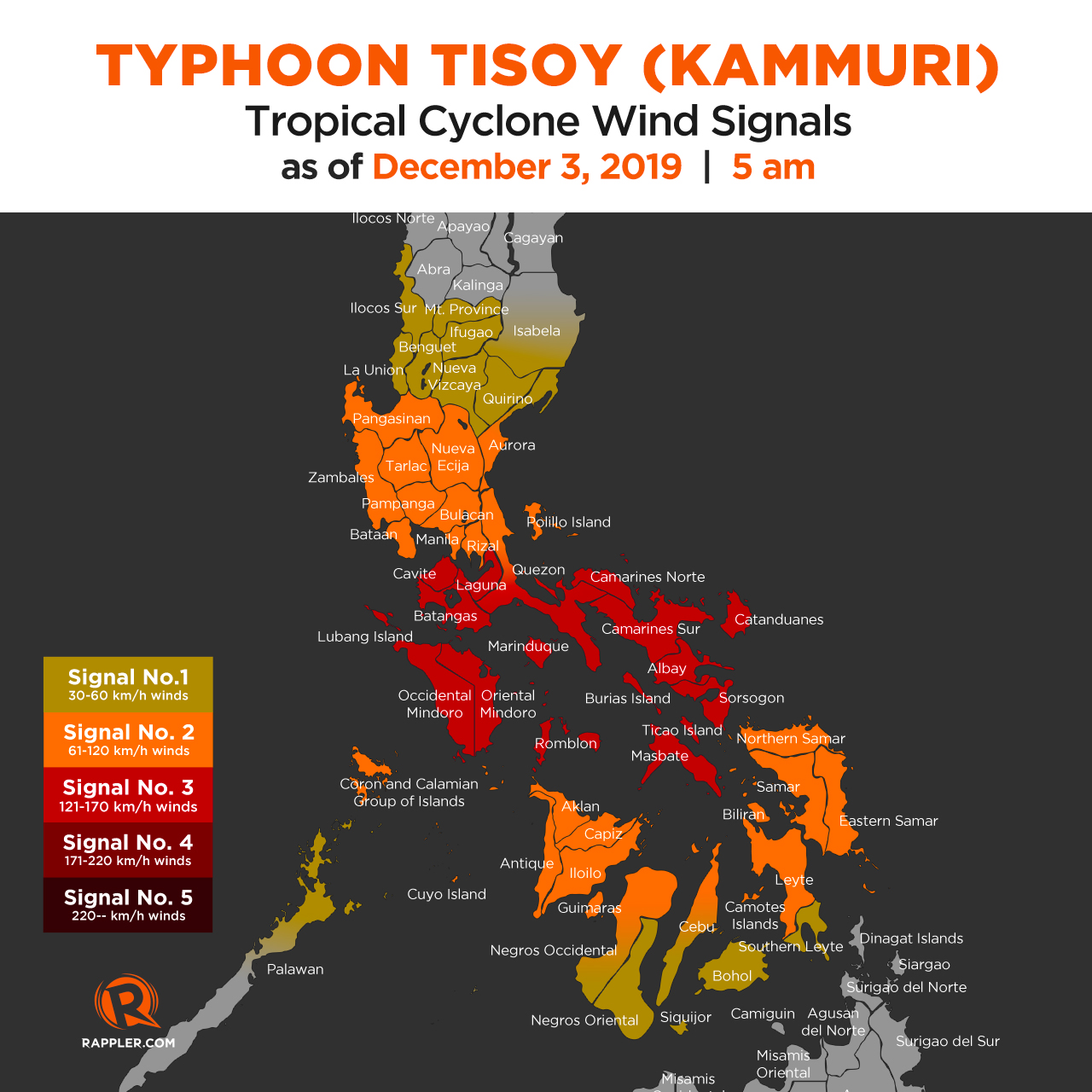 Tuesday is also the day when the peak of rain from Tisoy is expected. Here’s the latest on the projected rainfall:

Residents should stay on alert for possible flash floods and landslides. (READ: Typhoon Kammuri track may be like Glenda in 2014, Reming in 2006)

Numerous domestic and international flights to and from the Philippines have also been canceled due to Tisoy. In Metro Manila, the Ninoy Aquino International Airport will be closed for 12 hours on Tuesday. 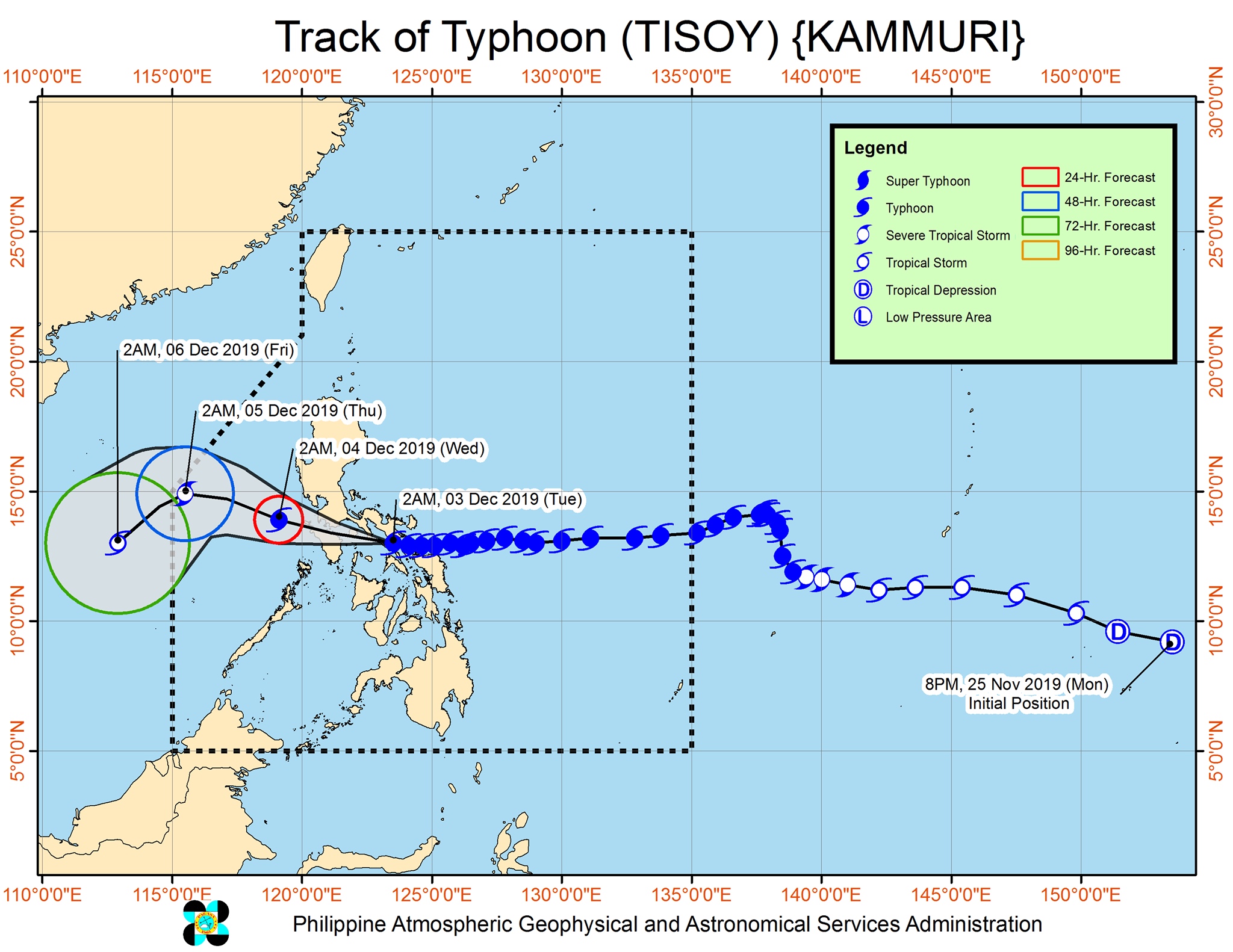