Rain to persist in parts of Northern, Central Luzon on December 6 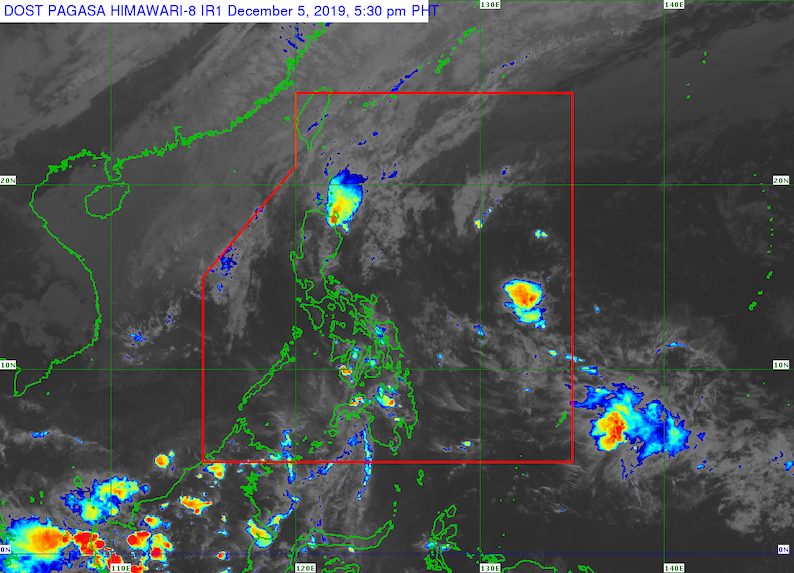 Facebook Twitter Copy URL
Copied
The tail-end of a cold front will bring scattered rainshowers and thunderstorms until Friday, December 6

MANILA, Philippines – The tail-end of a cold front will continue to trigger rain in the eastern parts of Northern Luzon and Central Luzon until Friday, December 6.

The Philippine Atmospheric, Geophysical, and Astronomical Services Administration (PAGASA) defines the tail-end of a cold front as an “extended zone of converging winds from east to northeast that often brings thunderstorms and rainshowers.”

In a bulletin issued 4 pm on Thursday, December 5, PAGASA said scattered rainshowers and thunderstorms are expected in the following areas within the next 24 hours:

Flash floods and landslides are possible, especially during periods of moderate to heavy rain.

Meanwhile, the northeast monsoon or hanging amihan will also cause light rain in the rest of Central Luzon and in the Ilocos Region, but PAGASA said there will be “no significant impact.”

The rest of the country, including Metro Manila, will enjoy generally fair weather on Friday, with just isolated rainshowers or localized thunderstorms.

PAGASA also issued a gale warning due to the surge of the northeast monsoon. This means rough to very rough seas are expected in the areas below.

Wave height of 2.8 meters to 6 meters

PAGASA advised fishing boats and other small seacraft not to sail. Larger vessels should watch out for big waves.

Meanwhile, PAGASA continues to monitor a low pressure area (LPA) outside the Philippine Area of Responsibility (PAR). This LPA, fortunately, is unlikely to develop into a tropical depression. It may just dissipate in the coming days.

Earlier on Thursday, Tisoy (Kammuri) made its exit from PAR as a tropical depression. It was a powerful typhoon that wreaked havoc this week, leaving at least 13 people dead and hundreds of millions of pesos in damage, based on initial estimates.