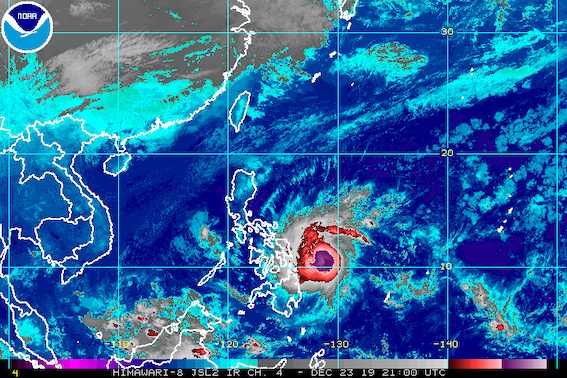 Facebook Twitter Copy URL
Copied
Signal Nos. 1 and 2 are raised in even more areas as of 5 am on Tuesday, December 24. Metro Manila is now under Signal No. 1.

MANILA, Philippines – Ursula (Phanfone) strengthened from a tropical storm into a severe tropical storm before dawn on Tuesday, December 24, before its expected Christmas Eve landfall in Eastern Samar.

In a bulletin issued 5 am on Tuesday, the Philippine Atmospheric, Geophysical, and Astronomical Services Administration (PAGASA) said Ursula is already 315 kilometers east of Guiuan, Eastern Samar.

The severe tropical storm is moving west northwest at the same relatively fast pace of 30 kilometers per hour (km/h).

PAGASA said it is not yet ruling out the possibility that Ursula could become a typhoon before landfall or while crossing the Philippines’ inland seas.

Ursula is forecast to make landfall in Eastern Samar on Tuesday afternoon or evening.

Below is the latest list of areas where tropical cyclone wind signals are raised. Note that Signal Nos. 1 and 2 are raised in even more areas. Metro Manila is now under Signal No. 1.

Specifically for areas under Signal No. 2 in Eastern Visayas, PAGASA warned of damaging gale- to storm-force winds which may begin to be felt Tuesday afternoon. Such winds would also be felt in Albay, Sorsogon, Masbate, and portions of Capiz, Iloilo, and the northern part of Cebu by Tuesday evening.

“This may bring light to moderate damage to high-risk structures and at most light damage to medium-risk structures,” said PAGASA. (READ: Why is it now called tropical cyclone ‘wind’ – and not ‘warning’ – signals?)

Aside from strong winds, Ursula will be bringing heavy rain starting Tuesday.

Maritime trips had been canceled as early as Monday, December 23. There are canceled flights for Tuesday as well.

Based on its latest forecast track, Ursula is expected to leave the Philippine Area of Responsibility on Saturday, December 28.