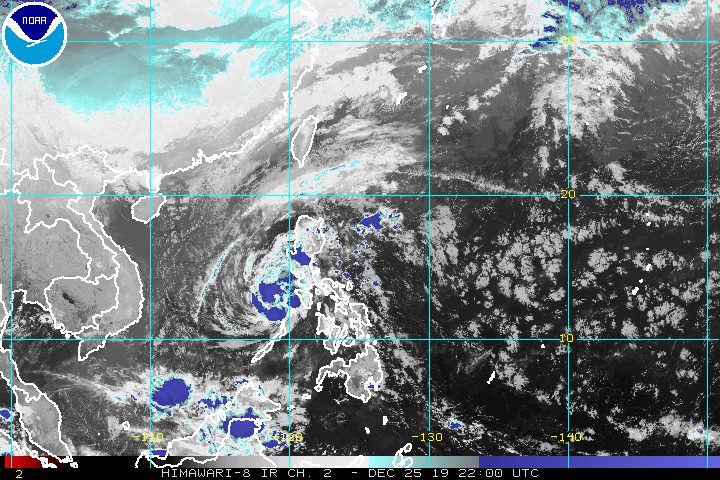 Facebook Twitter Copy URL
Copied
There will still be rain in parts of Luzon on Thursday, December 26, but weather is later expected to gradually improve

MANILA, Philippines – After making 7 landfalls in the country, Typhoon Ursula (Phanfone) is now over the West Philippine Sea.

In a briefing past 5 am on Thursday, December 26, the Philippine Atmospheric, Geophysical, and Astronomical Services Administration (PAGASA) said Ursula is already 155 kilometers northwest of Coron, Palawan.

The typhoon slightly slowed down, now moving west northwest at 15 kilometers per hour (km/h) from the previous 20 km/h.

Though Ursula is already over the West Philippine Sea, there will still be rain in parts of Luzon on Thursday. But PAGASA Weather Specialist Raymond Ordinario said weather will gradually improve later as Ursula moves farther from land. (READ: FAST FACTS: Tropical cyclones, rainfall advisories)

PAGASA advised residents of those areas to stay on alert for flash floods and landslides.

There are no more storm surge advisories, but travel remains risky in the seaboards of areas under tropical cyclone wind signals. Ursula earlier left at least 23,789 passengers stranded.

Dozens of domestic flights have been canceled since Christmas Eve onwards.