May 13, 2020 6:00 PM PHT
Acor Arceo
Facebook Twitter Copy URL
Copied
Aside from areas in Eastern Visayas, parts of Bicol are also placed under Signal No. 1 due to Severe Tropical Storm Ambo (Vongfong) on Wednesday afternoon, May 13 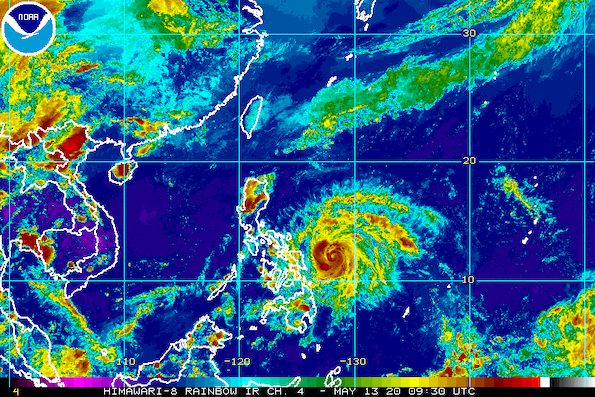 MANILA, Philippines – Ambo (Vongfong) intensified from a tropical storm into a severe tropical storm on Wednesday afternoon, May 13, as it continued to move toward the Eastern Visayas-Bicol area.

In an online briefing past 5 pm on Wednesday, the Philippine Atmospheric, Geophysical, and Astronomical Services Administration (PAGASA) said Ambo now has maximum winds of 95 kilometers per hour (km/h) from the previous 85 km/h and gustiness of up to 115 km/h from the previous 105 km/h.

It could still strengthen into a typhoon in the next 24 hours, warned PAGASA. (READ: FAST FACTS: Tropical cyclones, rainfall advisories)

At the moment, Ambo is located 315 kilometers east of Borongan City, Eastern Samar. It has been moving at a generally slow pace, currently at just 10 km/h as it heads west northwest.

More areas were placed under Signal No. 1 as of Wednesday afternoon. These are:

PAGASA said strong to gale force winds may hit Northern Samar and the northern parts of Eastern Samar and Samar beginning Thursday afternoon, May 14, and Sorsogon, Ticao Island, Catanduanes, and the southern part of Albay starting Friday morning, May 15. (READ: Why is it now called tropical cyclone ‘wind’ – and not ‘warning’ – signals?)

Scattered light to moderate rain, with at times heavy rain during thunderstorms

Heavy rain from Ambo might cause floods, landslides, and even lahar from Mayon Volcano. The Philippine Institute of Volcanology and Seismology issued an advisory on Wednesday, warning that rainfall from Ambo might mix with volcanic deposits from Mayon’s 2018 eruption, which could result in lahar or volcanic mudflows.

PAGASA Weather Specialist Loriedin de la Cruz said in the briefing that Ambo remains likely to make landfall in Bicol between Thursday evening and Friday morning. The province where it could make landfall has yet to be specified. While bracing for Ambo, the Philippines is also combating the coronavirus outbreak. The number of COVID-19 cases in the country climbed to 11,618 on Wednesday. – Rappler.com