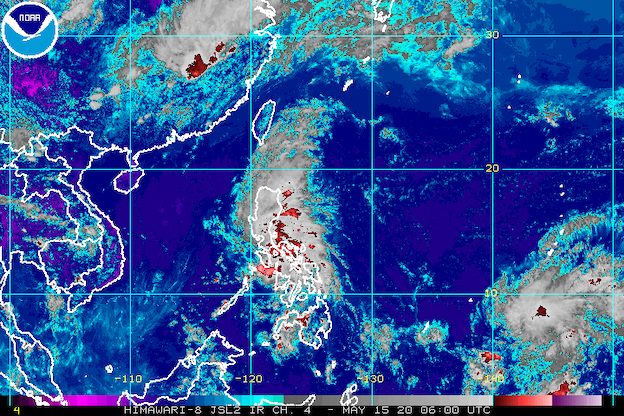 Facebook Twitter Copy URL
Copied
Though Ambo (Vongfong) is no longer a typhoon as of early Friday afternoon, May 15, it will continue to bring heavy rain and strong winds to areas in its path

MANILA, Philippines – Ambo (Vongfong) weakened from a typhoon into a severe tropical storm as it continued to head for the northern part of Quezon and Laguna early Friday afternoon, May 15.

In a bulletin released past 2 pm on Friday, the Philippine Atmospheric, Geophysical, and Astronomical Services Administration (PAGASA) said Ambo is now in the vicinity of Agdangan, Quezon, still moving northwest at 20 kilometers per hour (km/h).

Despite this, however, Ambo will continue to bring heavy rain and strong winds to areas in its path.

There are no more areas under Signal No. 3, but many areas in Luzon remain under Signal Nos. 1 and 2. (READ: Why is it now called tropical cyclone ‘wind’ – and not ‘warning’ – signals?)

PAGASA maintained its rainfall outlook for Friday, and updated its forecast for Saturday, May 16.

As a typhoon, Ambo had made landfall in the country 6 times – thrice on Thursday and thrice on Friday.

Flash floods and landslides remain possible. The Philippine Institute of Volcanology and Seismology also warned on Wednesday, May 13, that the rainfall from Ambo might mix with volcanic deposits from Mayon Volcano’s 2018 eruption, which could result in lahar or volcanic mudflows in Albay.

Sea travel is still risky for all vessels in the seaboards of areas under tropical cyclone wind signals.