Apr 4, 2014 1:46 PM PHT
Carmela Fonbuena
Facebook Twitter Copy URL
Copied
It is nothing like 'Yolanda' but unless it slows down, the tropical depression may become a strong typhoon that will hit parts of the Visayas and Mindanao next week 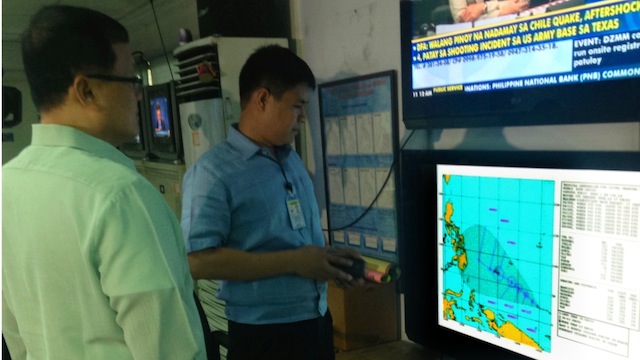 MANILA, Philippines – The National Disaster Risk Reduction and Management Council (NDRRMC) is monitoring a tropical depression east of Palau that may intensify into a strong typhoon likely to hit vulnerable areas in the Philippines  next week.

Based on its current trajectory, the weather disturbance may hit areas in eastern Visayas previously devastated by typhoon Haiyan (Yolanda), and also parts of eastern Mindanao that were on the path of typhoon Pablo, by April 9 or April 10.

“We are monitoring this Tropical Disturbance that now develops into a Tropical Depression. We will coordinate with PAGASA as to when we will give advisory to the people,” NDRRMC chief Eduardo Del Rosario told reporters on Friday, April 4.

Unless the tropical depression slows down, Del Rosario said it is likely to turn into a strong typhoon that will enter the Philippine area of responsibility (PAR) by April 7 or April 8. He also said there’s also a possibility that it may get weaker.

“There is a possibility it will be stronger because it is in the middle of the ocean. It is also possible it will be weaker if there are forces that will pull and slow it down. If ever it will make landfall in our country, it will be by Wednesday or Thursday (April 9 or April 10). It will enter PAR most likely by Monday,” Del Rosario said.

Del Rosario said the weather disturbance appears much weaker than typhoon Yolanda, which killed thousands of people and displaced hundreds of thousands in eastern Visayas last year. He explained that Yolanda had already developed into a typhoon when it was in the same area.

“There is a big difference….Most likely it will not be comparable to Yolanda,” he said.

Del Rosario said there is no cause for alarm since even if a strong typhoon hits the country, it will not be on the level of typhoon Yolanda.

“There is no reason to panic. Sanay tayo sa ganitong klase ng bagyo. Ang hindi tayo sanay ‘yung Yolanda-like. (We are used to this kind of typhoon. What we are not used to is the Yolanda-like typhoon),” he said.

Based on an April 3 report posted on the screens of the NDRRMC, the tropical disturbance is moving westward and is “carrying maximum sustained winds of 45kph near the center.”

“Global Dynamic Forecast Models (GDFM) continues to show the cyclone strengthening into a Tropical Storm as it approaches  the eastern shoreline of Northeastern Mindanao-Eastern Visayas on Tuesday or Wednesday, April 7-8,” the report said. – Rappler.com