State weather bureau PAGASA said the tropical storm has made landfall over the northern tip of Cagayan.

As of 10 am Friday, the center of Mario was located at 64 km north northeast of Tuguegarao City. The tropical storm packs maximum sustained winds of 85 km per hour near the center and gustiness of up to 100 km per hour.

It is seen to move west northwest at 22 km per hour, PAGASA said, with moderate to intense rains (7 to 20 mm per hour) within the tropical storm’s 350-km diameter. (#MarioPH: Help map critical reports) Residents in these areas are alerted against possible flashfloods and landslides.

The combined effects of Mario and the southwest monsoon will bring moderate to heavy rains and thunderstorms in Metro Manila and the rest of Luzon which may also trigger flashfloods and landslides.

The next bulletin for Mario will be issued at 5 pm Friday. 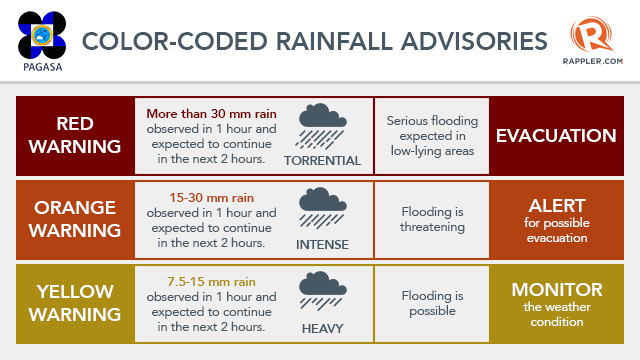 As of 12 nn, PAGASA hoisted heavy rainfall alerts over the the following areas