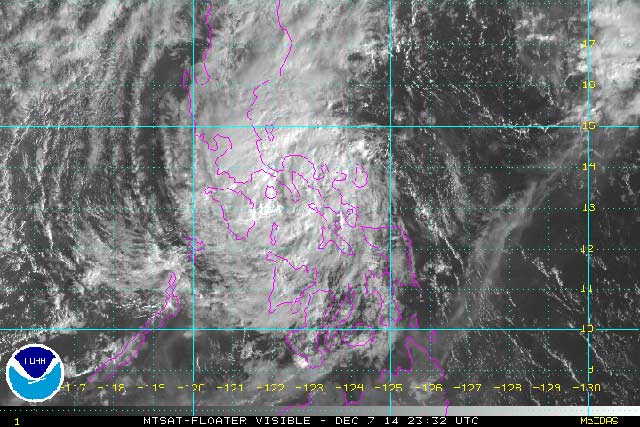 MANILA, Philippines (2nd UPDATE) – Ruby (Hagupit) has been downgraded into a tropical storm by government scientists late Monday morning, December 8, but storm warning signals are still up in large parts of Southern Luzon and the Visayas.

As of 10 am Monday, the eye of the storm was located 20 kilometers east of Torrijos, Marinduque, with maximum sustained winds of 105 km/h near the center and gusts of up to 135 km/h.

The storm’s diameter has become smaller, now just 450 kilometers across, and moderate to heavy rainfall is expected by places under this area.

The Japan Meteorological Agency, regional meteorological center for the Western Pacific, and the US Navy Joint Typhoon Warning Center have also downgraded Ruby as a tropical storm.

Public storm warning signals up to signal number 3, however, are still in effect over parts of Luzon and the Visayas. Signal number 3 is currently in effect over these areas:

Signal Number 2 is in effect over these areas:

Signal Number 1 is in effect over these areas:

The bureau’s forecast track now brings it next to mainland Luzon, with Batangas and Cavite along its track. A 4th landfall is now expected over Laiya, Batangas, the bureau later said in an update. Southern Luzon, parts of Central Luzon, Metro Manila, Mimaropa, and parts of Western Visayas should expect more rain in the coming hours, as the slow-moving storm – moving at a pace of 10 km/h – continues its way through the country.

The closest the center of the typhoon will come to Metro Manila will be some 60 km south, overnight until early Tuesday, December 9.

State forecasters said there are still some possible storm surges in Manila Bay, but could just be between 1-2 meters high. The surges will depend on the circulation of the winds, which in this case will come from land instead of the sea.

“TS Ruby and the Northeast Monsoon will cause rough to very rough sea conditions over the seaboards of Luzon and Visayas,” the bureau said.

National Disaster Risk Reduction and Management Council chief Alexander Pama warned again residents of flood-prone areas in Metro Manila to evacuate. “Kung may plano po tayong lumikas, ngayon po ang oras (If you plan to evacuate, this is the time,” he said during a 4 pm briefing.

PAGASA also warned that the 10 pm high tide will aggravate the impact of Typhoon Ruby.

“We are on 24-hour alert for floods and storm surges… it’s the flooding that we are worried about,” Joseph Estrada, mayor of Manila, the original city of two million within Metro Manila, told Agence France-Presse.

Thousands of people, mostly the city’s poorest residents who live in shanty homes along the coast and riverbanks, crammed into schools and other government evacuation centers across the megacity on Monday.

Schools were also suspended, the stock market was closed, many office and government workers were told to stay at home, and dozens of commercial flights were cancelled.

The next bulletin will be issued at 5 pm Monday. – With reports from Agence France-Presse and Carmela Fonbuena/Rappler.com