As of 4 pm, Amang’s center was located 60 km north northeast of Borongan, Eastern Samar, carrying maximum winds of 100 km/h near the center and gusts of up to 130 km/h, the bureau said.

Public storm warning signal number 2, where winds of up to 61-100 km/h is expected within 24 hours, have been raised in the following areas:

The raising of a storm signal over Metro Manila comes a day before a public outdoor mass to be given by Pope Francis in Quirino Grandstand, Manila.

Around 6 million people are expected to attend the last major event of the pontiff’s visit to the country.

Amang is moving northwest at a speed of 19 km/h, and is forecast by PAGASA to be moving just east of Luzon, skirting Bicol, in the following days.

In areas with storm signals, PAGASA warned residents in low lying and mountainous areas against possible flashfloods and landslides. Ocean waves may also reach up to 9 meters within the diameter of the storm.

“Fisherfolks and those with small seacrafts are advised not to venture out over seaboards of Luzon, Visayas and the eastern seaboard of Mindanao,” PAGASA said.

Other weather stations have upgraded Amang to a typhoon.

The US Joint Typhoon Warning Center (JTWC) detected winds with speeds of 111 km/h to 139 km/h.

The PAGASA track shows it skirting the eastern shores of Visayas and Luzon. The JTWC and JMA tracks predict Amang will move northwestward passing directly over Metro Manila before leaving the Philippine landmass. 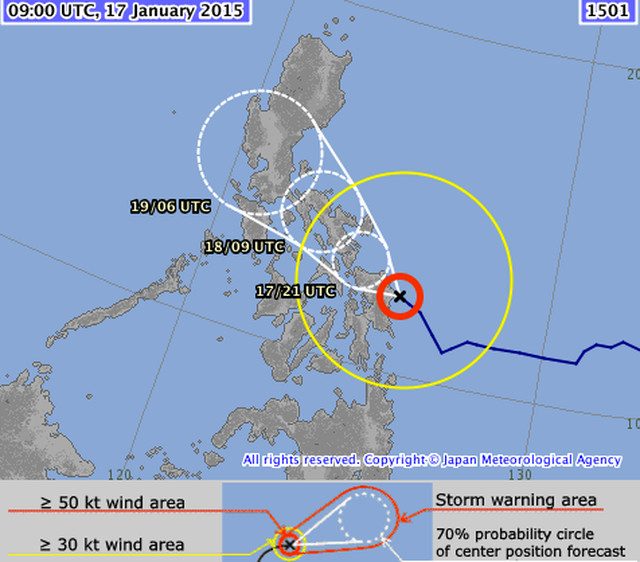 The next PAGASA bulletin on Amang will be issued 11 pm Saturday. – Rappler.com