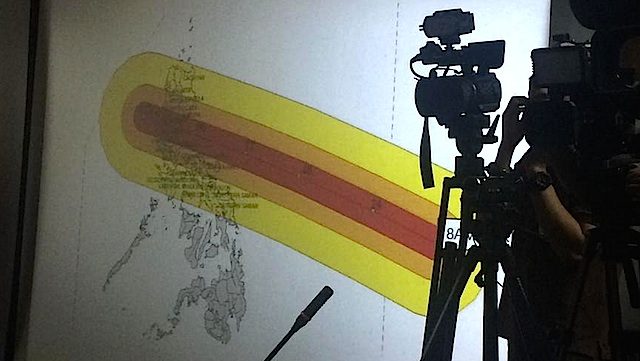 The Holy Week is widely observed in the predominantly Catholic nation. It means a  4-day break for most of the population beginning Maundy Thursday, April 2, the same day the unexpected summer typhoon will enter the Philippine Area of Responsibility (PAR).

Coinciding with the summer break of most students, it is the time that most families take out-of-town vacations.

“Di naman sinasabi na i-cancel nila (We are not saying they should cancel), but they should make the necessary adjustment. Mararamdaman natin ang bagyo (We will feel the intensity of the typhoon) Friday evening, Saturday, or Sunday,” Defense Secretary Voltaire Gazmin said after a meeting of the National Disaster Risk Reduction and Management Council (NDRRMC) on Wednesday.

“Ito yung pabalik na sila (This is the time they are expected to return from their vacation). They should make necessary adjustments,” Gazmin added.

State weather bureau PAGASA also appealed to the media networks, which usually suspend operations during the Holy Week, to run updates on the typhoon.

NDRRMC executive director Alexander Pama said those visiting the provinces should coordinate with local government units about their preparations for the typhoon.

“It is a challenge for us because a lot of people are in the provinces for their vacation. Because they’re on holiday mode, they might not notice the warnings issued in their locations. They should coordinate with the local governments regarding this typhoon” Pama added.

They should know, for example, where the evacuation centers are.

5kph short of a supertyphoon

Typhoon Maysak is expected to enter PAR Wednesday evening, April 1, or Thursday morning, April 2, and will be given its local name Chedeng.

It is a strong typhoon, 5 kph short of being a super typhoon, that has a diameter of 600-700 kilometers. PAGASA said it is expected to weaken as it approaches the country but will likely remain a strong typhoon. There is still a possibility it will recurve although PAGASA said it is unlikely, citing similitary in typhoon track projections released by various weather agencies.

Based on the 11 am assessment of PAGASA, Maysak has sustained winds of 215 kph and with gustiness of 250 kph.

It is likely to hit the eastern coast of Aurora by Saturday or Sunday, April 4-5, and move 17 kph west northwest towards central and northern Luzon.