Facebook Twitter Copy URL
Copied
Storm signal number 1 will be raised over Bicol and Samar provinces within the next 12 hours. PAGASA warns of possible storm surges of up to 4 meters over the eastern coast of Samar, Bicol, and Aurora-Quezon.

As of 10 am Thursday, Chedeng was located at 915 km east northeast of Borongan, Eastern Samar, or 995 km east of Catarman, Northern Samar.

The typhoon has maximum sustained winds of 175 km/h near the center and gustiness of up to 210 km/h.

It will continue to move west northwest at 19 km/h, with moderate to heavy rainfall expected within its 150-200 km radius.

Chedeng is expected to make landfall over the eastern coast of Aurora or Isabela by late Saturday evening, April 4, to early Sunday morning, April 5. 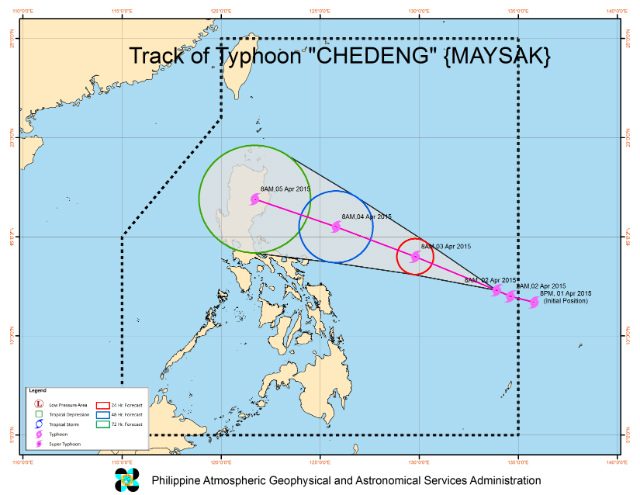 In a news briefing Thursday morning, PAGASA weather division chief Esperanza Cayanan said public storm warning signal number 1 will be raised over Bicol and Northern Samar within the next 12 hours.

Effects of the typhoon will be felt as early as Friday evening, April 3, especially in the eastern section of Luzon, National Disaster Risk Reduction and Management Council (NDRRMC) Executive Director Alexander Pama said in a news briefing Thursday.

“We are hoping this will be a tropical storm intensity, or even tropical depression as it passes over land,” Cayanan added.

PAGASA warned of possible storm surges of up to 4 meters over the eastern coast of Samar, Bicol, and Aurora-Quezon.

“The public is alerted against possible flashfloods over low-lying areas and landslides along mountain slopes particularly over Aurora-Isabela area. Fisherfolks are advised not to venture out over the eastern seaboard of Bicol Region and of Visayas,” PAGASA said in its 11 am bulletin on Thursday.

The next bulletin on Chedeng will be issued at 11 pm Thursday. A list of areas that will be affected by storm surges may also be released within the day. – Rappler.com