MANILA, Philippines – Severe Tropical Storm Egay maintained its strength as it hovered in the vicinity of Mount Cagagangan in Cagayan at 4 am on Sunday, July 5.

According to state weather bureau PAGASA’s 11 am Sunday bulletin, Egay’s winds were at 95 kilometers/hour (km/h) at its center with gusts of up to 120 km/h.

It is now moving faster and is forecasted to move northwest at a speed of 9 km/h compared to 7 km/h forecasted in the bulletin earlier that day.

Kalinga, Batanes, Ilocos Norte, and Abra were added to the list of areas under Public Storm Warning Signal No. 2.

Public Storm Signal No. 2 has been raised over 7 areas:

Public Storm Signal No. 1 has been raised over 8 areas: 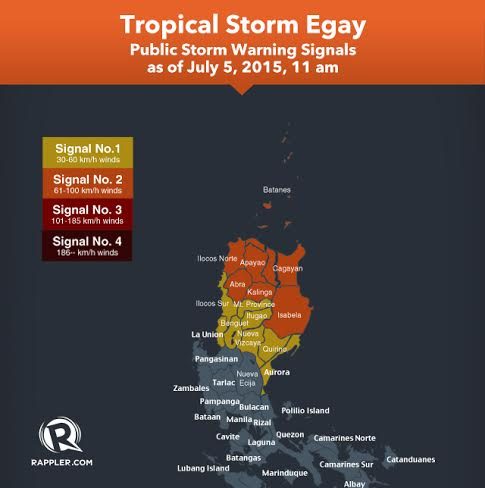 Areas within the 300-kilometer diameter of the storm will experience moderate to occasionally heavy rain, said PAGASA.

Residents of mountainous and low-lying areas in provinces under public storm signals should be prepared for possible landslides and flashfloods, warned PAGASA.

The same hazards may also be experienced by those in some parts of Metro Manila, Calabarzon (Region 4A), Mimaropa (Region 4B), and the rest of Northern and Central Luzon.

Fisherfolk and small seacrafts were cautioned against venturing out to the seaboards of Luzon and Visayas.

Storm surge may also occur in coastal areas under Storm Signal No 2.

Egay is expected to exit the Philippine landmass later this evening. It is likely to be outside the Philippine Area of Responsibility on Wednesday afternoon.

The next update on Egay will be released by PAGASA at 5 pm. – Rappler.com