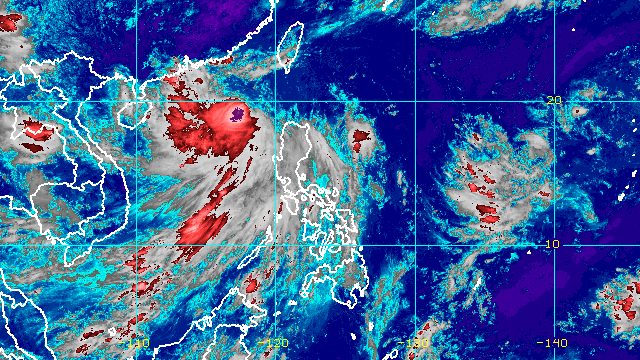 FLORITA. Satellite image of Severe Tropical Storm Florita (Ma-on) outside the Philippine Area of Responsibility as of August 24, 2022, 11 am.

MANILA, Philippines – Rainfall warnings due to Severe Tropical Storm Florita (Ma-on) were lifted and there were no more areas under Signal No. 1 as of 11 am on Wednesday, August 24, as the tropical cyclone continued to move away outside the Philippine Area of Responsibility (PAR).

Florita had left PAR before dawn on Wednesday. It was already 490 kilometers west of Calayan, Cagayan, still over the West Philippine Sea, late Wednesday morning.

The Philippine Atmospheric, Geophysical, and Astronomical Services Administration (PAGASA) said Florita is moving west northwest toward China at 25 kilometers per hour (km/h). It is expected to make landfall in the southern part of China on Thursday morning or early afternoon, August 25.

Florita slightly strengthened, with its maximum sustained winds increasing from 95 km/h to 100 km/h. Its gustiness increased from 115 km/h to 125 km/h.

PAGASA said Florita is likely to intensify into a typhoon on Wednesday evening.

Florita made landfall in Maconacon, Isabela, at 10:30 am on Tuesday, August 23, bringing torrential rain and strong winds. It then crossed Isabela, Cagayan, Apayao, and Ilocos Norte, before emerging over the West Philippine Sea on the same day.

It was the country’s sixth tropical cyclone for 2022.

Even as Florita moves away, it is still enhancing the southwest monsoon or hanging habagat, which is affecting the western part of Luzon on Wednesday.

In a separate advisory at 11 am, PAGASA said the southwest monsoon will trigger light to moderate rain, with at times heavy rain, in these areas:

The weather bureau warned that scattered floods and landslides are likely.

The southwest monsoon is also causing gusts in the following areas:

Meanwhile, the gale warning issued at 5 am remains in effect. Rough to very rough seas, with waves 2.8 to 5 meters high, are expected in these seaboards:

PAGASA advised fishing boats and other small vessels not to sail, and larger vessels to watch out for big waves. – Rappler.com