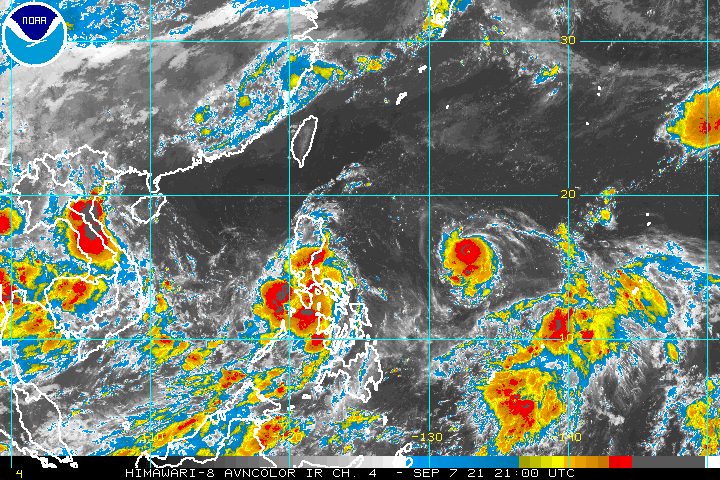 In a briefing past 5 am on Wednesday, the Philippine Atmospheric, Geophysical, and Astronomical Services Administration (PAGASA) said Jolina was located off Boac, Marinduque.

It continues to have maximum sustained winds of 100 km/h, while its gustiness is now up to 150 km/h from the previous 125 km/h.

As of 5 am, Metro Manila joined the areas expected to see the strongest rain from Jolina on Wednesday.

“In addition, coastal areas of localities under [tropical cyclone wind signals], especially those at No. 2, may also experience coastal flooding due to hazardous surf conditions,” added the state weather bureau.

PAGASA maintained its warning against travel in seaboards affected by Jolina on Wednesday.

From Tayabas Bay, Jolina is seen to make another landfall in the eastern part of Batangas on Wednesday morning. But PAGASA is not ruling out landfall in the northern part of Oriental Mindoro, since the severe tropical storm’s track has been shifting southwest.

Jolina could cross the Batangas-Cavite area afterwards and emerge over Manila Bay on Wednesday evening.

Then it could make yet another landfall in Bataan. As it crosses mainland Luzon, Jolina may also weaken into a tropical storm.

So far, Jolina has made landfall seven times – the first six as a typhoon and the seventh as a severe tropical storm.

Kiko, meanwhile, rapidly intensified over the Philippine Sea. It now has maximum sustained winds of 150 km/h and gustiness of up to 185 km/h.

Late Tuesday evening, September 7, Kiko had maximum sustained winds of 120 km/h and gustiness of up to 150 km/h.

PAGASA now expects Kiko to reach a peak intensity of 185 to 205 km/h on Friday while moving over extreme Northern Luzon.

The typhoon was located 1,175 kilometers east of Central Luzon before dawn on Wednesday, moving west at 20 km/h.

It is heading for the Luzon Strait and the vicinity of extreme Northern Luzon.

There is also a “moderate to high likelihood” of tropical cyclone wind signals being raised for several provinces in Northern Luzon due to Kiko, beginning Wednesday evening or Thursday morning.

Signal No. 4 is now the highest possible tropical cyclone wind signal, since Kiko has considerably strengthened.

PAGASA added that Kiko may trigger rough conditions in the northern and eastern seaboards of Luzon beginning Thursday as it nears extreme Northern Luzon.

On Saturday, September 11, Kiko could pass near the southern coast of Taiwan, which is still within PAR. Weakening is possible on Saturday as the typhoon interacts with Taiwan’s rugged terrain.

Kiko is also seen to leave PAR on Saturday.