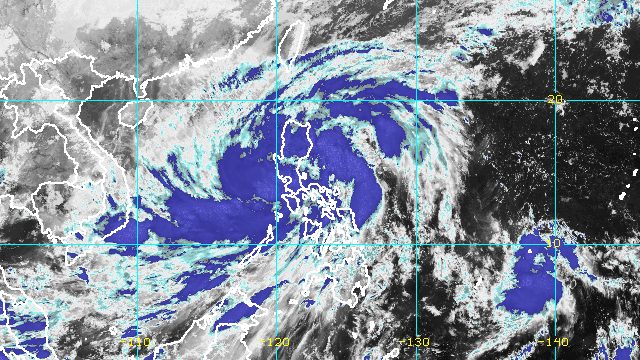 TROPICAL CYCLONES. Satellite image of Severe Tropical Storm Paeng (Nalgae), and a tropical depression outside the Philippine Area of Responsibility, as of October 29, 2022, 8 pm.

Paeng was already in the vicinity of General Mariano Alvarez, Cavite, at 7 pm on Saturday, continuing its northwest movement at 20 kilometers per hour (km/h).

The Philippine Atmospheric, Geophysical, and Astronomical Services Administration (PAGASA) said in its 8 pm bulletin that Paeng will cross the southern part of Bataan after passing through Cavite.

So far, the severe tropical storm has made landfall five times, all on Saturday:

After hitting Quezon for a second time, Paeng crossed Laguna, then Cavite.

Even before its landfalls in Luzon, however, Paeng already wreaked havoc in parts of Mindanao and the Visayas.

As of early Saturday evening, the severe tropical storm still had maximum sustained winds of 95 km/h and gustiness of up to 160 km/h. It is likely to maintain its strength while crossing land and intensify once it emerges over the West Philippine Sea.

PAGASA warned that rain in parts of Luzon may still be torrential at times on Saturday evening. The weather will only begin to improve when Paeng moves away on Sunday, October 30.

Below are the areas covered by tropical cyclone wind signals as of 8 pm on Saturday.

The gale warning issued at 5 pm on Saturday remains in effect.

Paeng may leave the Philippine Area of Responsibility (PAR) on Monday, October 31. It is the country’s 16th tropical cyclone for 2022 and the fourth for October.

PAGASA said the tropical depression may enter PAR on Monday or on Tuesday, November 1. It may not directly affect the Philippines, though the public should still monitor developments. – Rappler.com