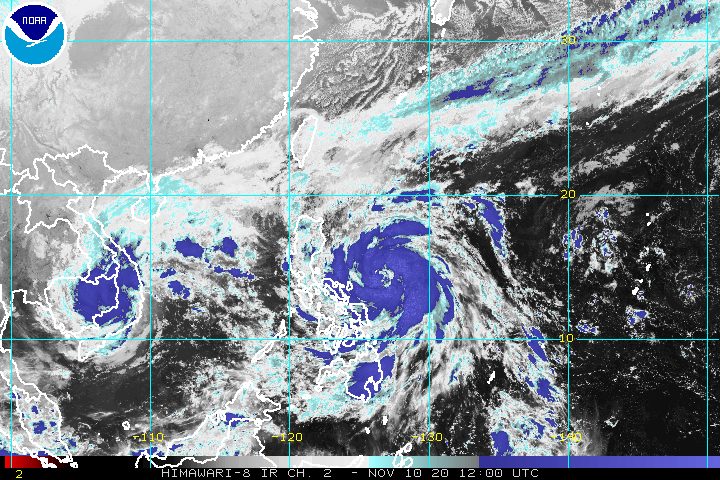 Facebook Twitter Copy URL
Copied
Severe Tropical Storm Ulysses (Vamco) has maximum sustained winds of 95 km/h and gustiness of up to 115 km/h early Tuesday evening, November 10. It will continue to strengthen in the coming hours.

In its 8 pm bulletin on Tuesday, the Philippine Atmospheric, Geophysical, and Astronomical Services Administration (PAGASA) said Ulysses now has maximum sustained winds of 95 kilometers per hour (km/h) and gustiness of up to 115 km/h.

Earlier on Tuesday afternoon, it had maximum sustained winds of 85 km/h and gustiness of up to 105 km/h. (READ: FAST FACTS: Tropical cyclones, rainfall advisories)

PAGASA warned that Ulysses may rapidly intensify further into a typhoon by Wednesday morning, November 11. As a typhoon, its peak intensity is seen to be 130 to 155 km/h by Wednesday afternoon or evening, and it is expected to make landfall at or near that intensity.

The severe tropical storm is moving west northwest, with its speed doubling to 30 km/h from the previous 15 km/h.

At the moment, PAGASA sees Ulysses moving toward the Camarines Norte-Quezon area.

It could make landfall in Quezon early Thursday morning, November 12, after moving very near Catanduanes on Wednesday afternoon and Camarines Norte on Wednesday evening.

But there is also an “increasing likelihood” of landfall in Camarines Norte on Wednesday afternoon or evening.

More areas have been placed under tropical cyclone wind signals as of 8 pm on Tuesday.

PAGASA said areas under Signal No. 2 should brace for damaging gale- to storm-force winds, while those under Signal No. 1 will have strong breeze to near gale conditions during the passage of Ulysses.

For the rest of Tuesday evening, light to moderate rain will persist due to Ulysses’ outer rainbands and the tail-end of a cold front. The rain may be heavy at times.

By early Wednesday morning, the rainfall from Ulysses will already be moderate to heavy in Bicol, parts of Quezon, Samar, Northern Samar, and Eastern Samar. Floods and landslides could occur.

In addition, the state weather bureau warned of a “moderate to high risk” of storm surges 1 to 2 meters high in the next 48 hours. These are the potential areas:

“These storm surges, which may be accompanied by swells and breaking waves reaching the coast, can cause life-threatening and damaging coastal inundation,” PAGASA said.

Ulysses will also cause rough to very rough waters, with waves 2.5 to 6 meters high, in these seaboards:

The surge of the northeast monsoon or hanging amihan is likewise causing rough to very rough seas, with waves 2.5 to 5 meters high, in the following:

Elsewhere, PAGASA advised small vessels to take precautionary measures as the country’s remaining seaboards will have moderate to rough waters.