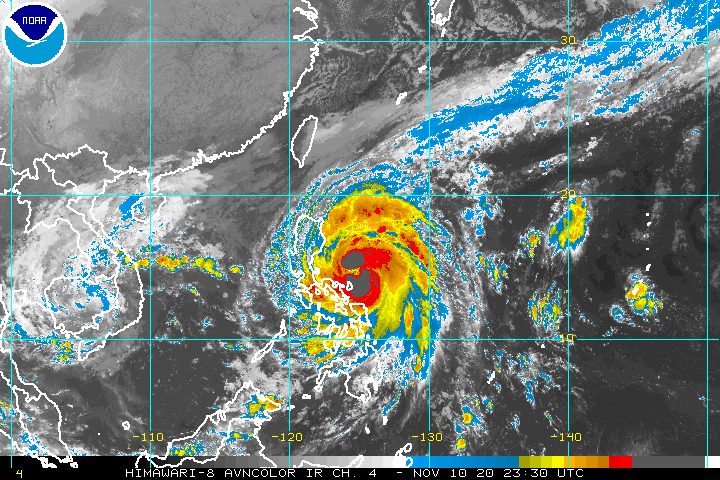 The Philippine Atmospheric, Geophysical, and Astronomical Services Administration (PAGASA) said in a bulletin released past 8 am on Wednesday that Ulysses now has maximum sustained winds of 110 kilometers per hour (km/h) from the previous 100 km/h and gustiness of up to 135 km/h from the previous 125 km/h.

A typhoon is classified as having maximum sustained winds of 118 to 220 km/h.

PAGASA said Ulysses may intensify into a typhoon within 6 to 12 hours and reach its peak intensity of 130 to 155 km/h before landfall. (READ: FAST FACTS: Tropical cyclones, rainfall advisories)

As of early Wednesday morning, the severe tropical storm is located 135 kilometers north northeast of Virac, Catanduanes, or 350 kilometers east of Infanta, Quezon.

It slightly accelerated, now moving west at 20 km/h from the previous 15 km/h.

The state weather bureau maintained this rainfall outlook for Ulysses:

Areas to be affected must watch out for possible floods, landslides, and lahar flows.

The list of areas under tropical cyclone wind signals was further expanded as of 8 am on Wednesday.

But once Ulysses intensifies into a typhoon, Signal No. 3 could be raised over Metro Manila as well as parts of Central Luzon, Calabarzon, and Bicol.

“Due to the orientation of the track forecast, these provinces may fall within the inner rainbands or eyewall region of this storm during the passage,” the state weather bureau warned.

Then it would cross mainland Luzon and emerge over the western seaboard of Central Luzon between Thursday morning and afternoon.

PAGASA said Ulysses could slightly weaken as it crosses mainland Luzon “due to frictional effects in the presence of the Sierra Madre and Zambales mountain ranges.” But it is likely to remain a typhoon.