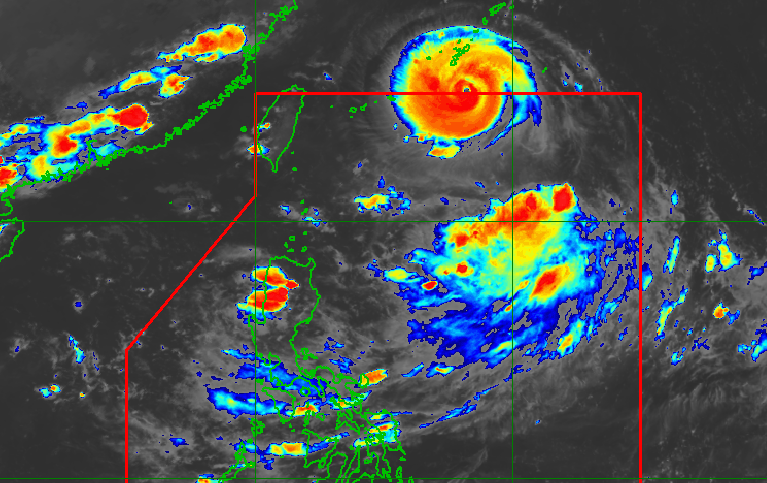 Facebook Twitter Copy URL
Copied
Tropical Depression Gardo is seen to weaken into a remnant low as early as Wednesday evening, August 31, as it gets absorbed by Super Typhoon Henry (Hinnamnor), located above it

Hinnamnor was given the local name Henry, as the Philippines’ eighth tropical cyclone for 2022. It is also the country’s first super typhoon for the year.

Both Henry and Gardo are not expected to make landfall, though the super typhoon may still affect extreme Northern Luzon due to its size. The trough or extension of Gardo is also bringing some rain, along with the southwest monsoon or hanging habagat.

The Philippine Atmospheric, Geophysical, and Astronomical Services Administration (PAGASA) had said on Wednesday afternoon that Henry, which is hundreds of kilometers northeast of extreme Northern Luzon, was moving west southwest at 25 kilometers per hour (km/h).

The super typhoon may slow down over the next two days, becoming almost stationary by late Thursday, September 1, until Friday, September 2.

As of Wednesday afternoon, Henry had maximum sustained winds of 195 km/h and gustiness of up to 240 km/h.

PAGASA said earlier on Wednesday morning that Henry could reach a peak intensity of 205 km/h within 24 hours before gradually weakening as it slows down. It could be downgraded to a typhoon by Friday afternoon or evening.

While Henry is not seen to hit land, tropical cyclone wind signals may be raised for extreme Northern Luzon.

Henry might enhance the southwest monsoon, too, which would trigger monsoon rain in the western part of Luzon on Friday.

The super typhoon may also cause rough seas in the northern and eastern seaboards of Luzon beginning late Thursday or early Friday. Conditions would be risky for small vessels.

The tropical depression still has maximum sustained winds of 55 km/h and gustiness of up to 70 km/h.

But Gardo is expected to weaken into a remnant low on Wednesday evening or early Thursday morning as it gets absorbed by Henry.

In the meantime, Gardo’s trough and the southwest monsoon are bringing scattered rain showers and thunderstorms to much of Luzon, specifically these areas:

Flash floods or landslides are possible during periods of moderate to heavy rain. – Rappler.com