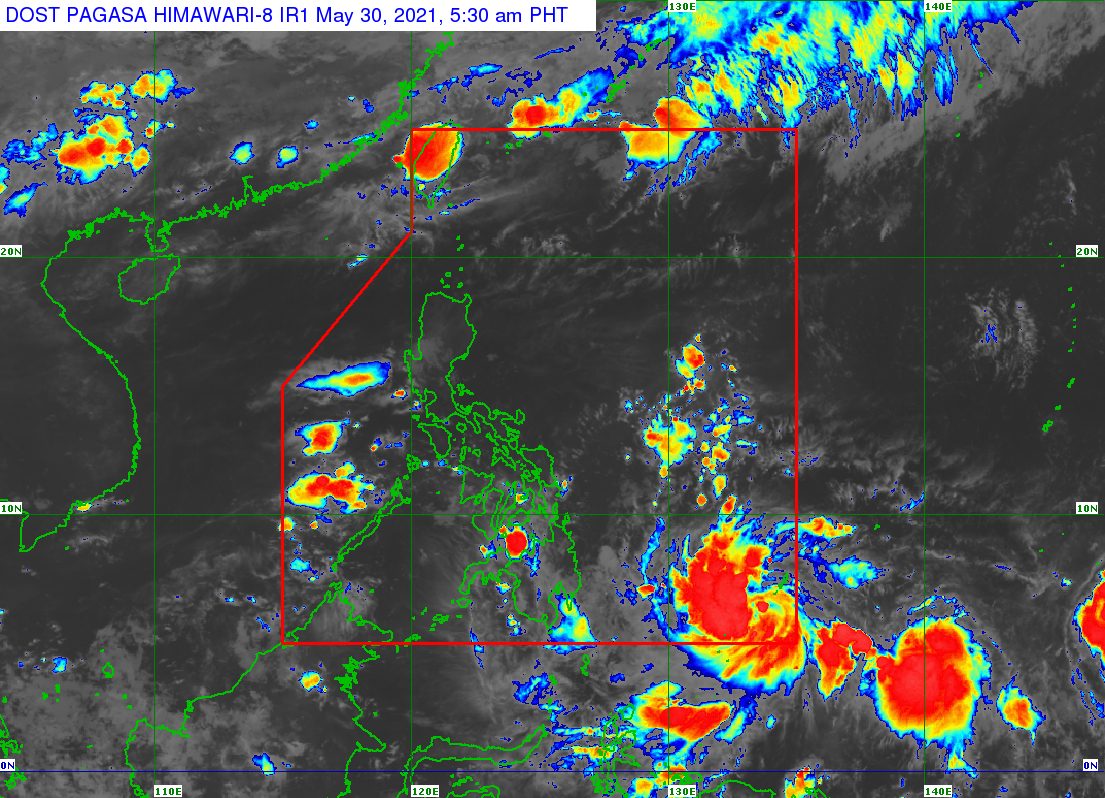 Facebook Twitter Copy URL
Copied
The outer rainbands of Tropical Depression Dante may start to affect Caraga and the Davao Region on Sunday, May 30

A tropical depression east of Mindanao entered the Philippine Area of Responsibility (PAR) at 1 am on Sunday, May 30.

It was given the local name Dante, as the country’s fourth tropical cyclone for 2021. (READ: FAST FACTS: Tropical cyclones, rainfall advisories)

The Philippine Atmospheric, Geophysical, and Astronomical Services Administration (PAGASA) said in a bulletin issued 5 am on Sunday that Tropical Depression Dante was located 1,000 kilometers east of Mindanao.

Dante is moving west northwestward at 15 kilometers per hour (km/h).

The tropical depression has maximum sustained winds of 45 km/h, gustiness of up to 55 km/h, and central pressure of 1,004 hectopascals (hPa).

Central pressure refers to the “surface pressure at the center of the tropical cyclone as measured or estimated,” according to the World Meteorological Organization.

In the next 24 hours, Dante’s outer rainbands could bring light to moderate rain, with at times heavy rain, to Caraga and the Davao Region in Mindanao.

PAGASA warned that isolated to scattered floods and landslides are possible.

Dante is expected to maintain a west northwest direction until Monday morning, May 31, before speeding up northwest for the rest of Monday going into Tuesday, June 1. For now, it appears unlikely to make landfall.

If it maintains that track, then it would be “less likely” for PAGASA to raise tropical cyclone wind signals. But if Dante shifts to the west or toward land, wind signals may be raised for the country’s eastern areas.

PAGASA also said “there is an increasing likelihood” of Dante becoming a tropical storm by Monday afternoon.

For the next 6 months, the state weather bureau estimates the following number of tropical cyclones inside PAR: