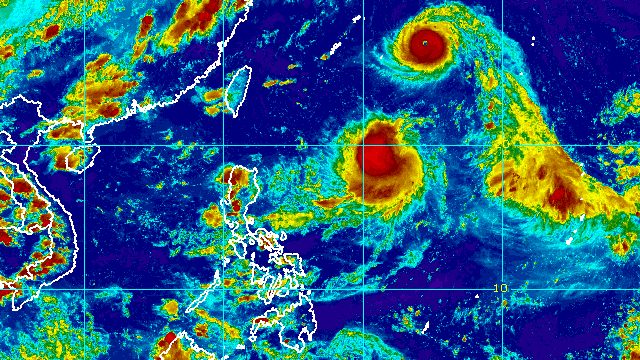 TROPICAL CYCLONES. Satellite image of Tropical Depression Gardo inside the Philippine Area of Responsibility and Super Typhoon Hinnamnor outside PAR, as of August 30, 2022, 5 pm.

Facebook Twitter Copy URL
Copied
Both Tropical Depression Gardo and Super Typhoon Hinnamnor, which would be named Henry when it enters the Philippine Area of Responsibility, are unlikely to make landfall

MANILA, Philippines – The low pressure area inside the Philippine Area of Responsibility developed into a tropical depression at 2 pm on Tuesday, August 30, the same time that Hinnamnor rapidly intensified from a typhoon into a super typhoon outside PAR.

The tropical depression, the Philippines’ seventh tropical cyclone for 2022, was given the local name Gardo.

So far, Gardo has maximum sustained winds of 55 km/h and gustiness of up to 70 km/h.

PAGASA said the tropical depression is unlikely to directly affect weather in the Philippines or conditions in the country’s coastal waters. It is not expected to approach land.

On Wednesday, August 31, Gardo is expected to strengthen into a tropical storm. But it could weaken into a remnant low by Thursday afternoon, September 1, as it gets absorbed by Super Typhoon Hinnamnor.

“This tropical cyclone may continue to intensify over the sea south of Japan and may reach a peak intensity of 195 km/h,” PAGASA said.

Hinnamnor is still expected to enter PAR on Wednesday evening. It would be given the local name Henry once inside PAR.

Also on Wednesday, the super typhoon may start slowing down, and eventually become almost stationary on Friday, September 2, until Saturday, September 3.

Like Gardo, Hinnamnor is not expected to make landfall in the Philippines. But tropical cyclone wind signals could be raised for extreme Northern Luzon due to the super typhoon, as its winds extend outwards up to 320 kilometers from its center.

Hinnamnor might also cause rough seas in the northern and eastern seaboards of Luzon beginning late Thursday or early Friday. Conditions would be risky for small vessels.

The super typhoon could leave PAR by Sunday, September 4.