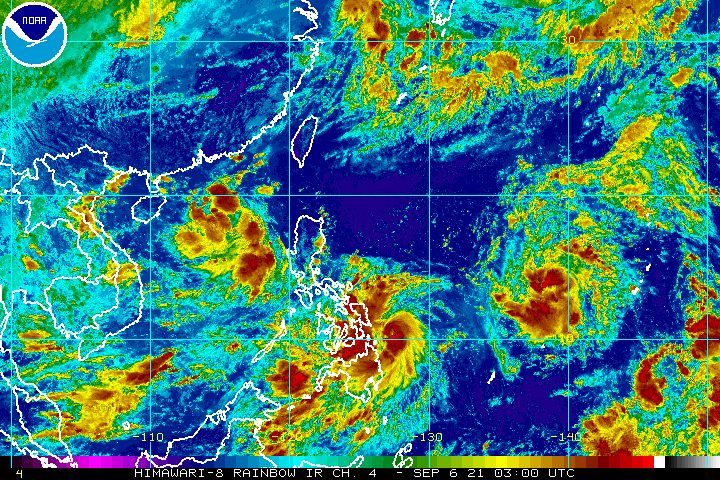 JOLINA. Satellite image of Tropical Depression Jolina as of September 6, 2021, 11 am. There is also another tropical depression outside the Philippine Area of Responsibility.

Tropical Depression Jolina strengthened a bit while moving over the Philippine Sea on Monday morning, September 6.

In a press conference past 11 am, the Philippine Atmospheric, Geophysical, and Astronomical Services Administration (PAGASA) said Jolina now has maximum sustained winds of 55 kilometers per hour and gustiness of up to 70 km/h.

It previously had maximum sustained winds of 45 km/h and gustiness of up to 55 km/h.

PAGASA now expects Jolina to intensify into a tropical storm by Wednesday, September 8, a day before its possible landfall.

The tropical depression slowed down, moving west at 15 km/h from the previous 20 km/h.

As of 11 am on Monday, here is PAGASA’s rainfall forecast for Jolina:

PAGASA warned the affected areas to watch out for isolated to scattered floods and landslides.

In terms of wind, these are the areas under Signal No. 1:

The areas under Signal No. 1 will have strong winds with occasional gusts.

If Jolina strengthens into a tropical storm, the highest possible tropical cyclone wind signal that would be raised is Signal No. 2.

The eastern seaboards of the Visayas and Mindanao also have moderate to rough waters due to Jolina, with waves 1.2 to 2.8 meters high. Small vessels must take precautionary measures.

Jolina is still seen to move northwest, parallel to the country’s east coast.

If it maintains its direction and speed, it may make landfall in Northern Luzon on Thursday morning, September 9, possibly in the Isabela area.

Then it could move west as it crosses Northern Luzon, and emerge over the West Philippine Sea by Thursday evening.

After hitting land, Jolina may also weaken back into a tropical depression as it crosses Northern Luzon’s rugged terrain.

Jolina is expected to leave the Philippine Area of Responsibility (PAR) on Friday morning, September 10.

PAGASA is also monitoring a tropical depression outside PAR, located 1,535 kilometers east of Virac, Catanduanes, as of Monday morning.

It could enter PAR on Wednesday, and would be given the local name Kiko.

For now, the potential Kiko is unlikely to directly affect weather in the country. It is not projected to make landfall.

But PAGASA said it may contribute to moderate to rough seas in the northern and eastern seaboards of Northern Luzon on Friday.