Signal No. 1 raised due to Tropical Depression Maymay 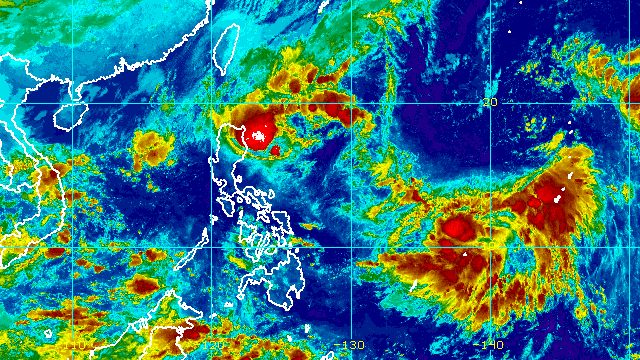 TROPICAL CYCLONES. Satellite image of Tropical Depression Maymay inside the Philippine Area of Responsibility and the tropical depression outside PAR, as of October 11, 2022, 5 am.

MANILA, Philippines – Signal No. 1 was raised in several areas for the first time due to Tropical Depression Maymay early Tuesday, October 11.

Maymay was last spotted 300 kilometers east of Casiguran, Aurora, the Philippine Atmospheric, Geophysical, and Astronomical Services Administration (PAGASA) said in its 5 am bulletin on Tuesday.

The tropical depression is moving southwest at only 10 kilometers per hour (km/h). It is expected to slow down and maintain its southwest direction in the next 48 hours.

As of early Tuesday, Maymay had maximum sustained winds of 45 km/h and gustiness of up to 55 km/h.

The following areas were placed under Signal No. 1 as of 5 am on Tuesday, which means they should brace for strong winds:

PAGASA also warned of rain from Maymay and the shear line, which may trigger scattered to widespread floods. It provided this forecast covering Tuesday until Wednesday morning, October 12:

Maymay and the surge of the northeast monsoon or hanging amihan will also cause rough to very rough seas in these seaboards on Tuesday:

The weather bureau added that the surge of the northeast monsoon may cause moderate to rough seas in the western seaboard of Central Luzon. Waves could be 1.5 to 3 meters high, making conditions risky for small vessels.

At its current pace, Maymay could make landfall in the southern part of Aurora or the northern part of Quezon on Wednesday afternoon or evening.

Then PAGASA said it may cross several provinces in Central Luzon before emerging over the West Philippine Sea on Thursday morning or afternoon, October 13.

Maymay is seen to remain a tropical depression in the next 48 hours, but it is likely to be downgraded to a low pressure area as it crosses Central Luzon.

Meanwhile, the other tropical depression that PAGASA is monitoring remains outside the Philippine Area of Responsibility (PAR).

It was located 1,730 kilometers east of Eastern Visayas early Tuesday, moving north northeast at a slightly slower 35 km/h from the previous 40 km/h.

The tropical depression is still projected to enter PAR on Thursday. It would be given the local name Neneng.

PAGASA will issue its next advisory on the tropical depression at 11 am on Tuesday, where more details will be given.

Maymay is the Philippines’ 13th tropical cyclone for 2022 and the first for October, while the potential Neneng would be the 14th for the year and the second for the month.