Signal No. 1 raised due to Tropical Depression Neneng 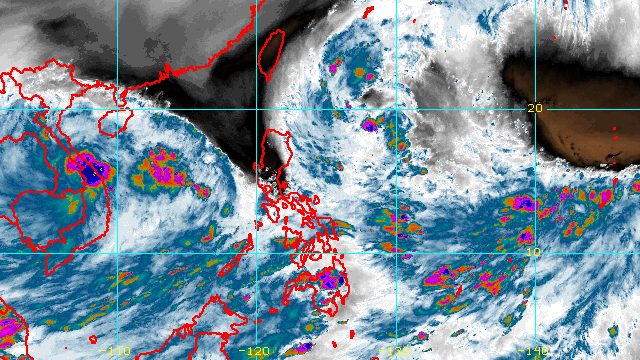 MANILA, Philippines – Parts of Northern Luzon were placed under Signal No. 1 due to Tropical Depression Neneng on Friday afternoon, October 14.

The Philippine Atmospheric, Geophysical, and Astronomical Services Administration (PAGASA) said in its 5 pm bulletin on Friday that Neneng was located 795 kilometers east of Calayan, Cagayan.

The tropical depression is moving west southwest over the Philippine Sea at only 10 kilometers per hour, slower than the previous 25 km/h.

It is generally heading in the direction of Babuyan Islands or Batanes, where it could make landfall or pass very close to land on Sunday morning or afternoon, October 16.

Neneng slightly intensified on Friday afternoon, with its maximum sustained winds returning to 55 km/h and its gustiness once again up to 70 km/h. It had slightly weakened in the morning.

Strong winds are expected in the following areas under Signal No. 1:

The warning lead time for areas under Signal No. 1 is 36 hours, which means the strong winds will not be felt immediately.

The highest possible wind signal is Signal No. 2, since Neneng is projected to intensify into a tropical storm by Saturday evening, October 15, or early Sunday morning.

PAGASA warned Northern Luzon to prepare for rain from Neneng, as well as possible floods and landslides, during the weekend. Here is the weather bureau’s updated rainfall forecast as of 5 pm on Friday:

Meanwhile, PAGASA issued a new gale warning due to the northeasterly surface windflow, also at 5 pm:

The weather bureau added that the surge of the northeasterly surface windflow and Neneng may cause moderate to rough seas in the eastern seaboards of Central Luzon and Southern Luzon. Waves could be 1.5 to 3.5 meters high, making conditions risky for small vessels.

Neneng may exit the Philippine Area of Responsibility (PAR) on Monday, October 17.