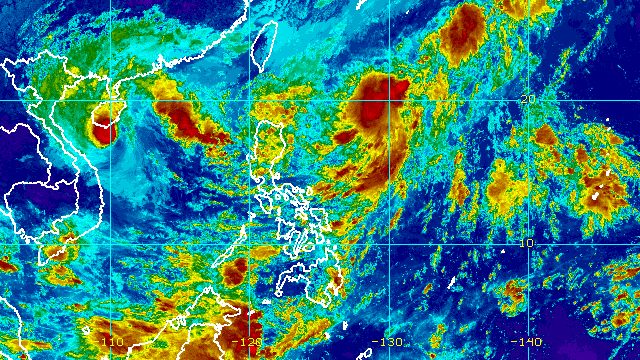 Facebook Twitter Copy URL
Copied
The shear line will trigger moderate to heavy rain in parts of Northern Luzon on Wednesday, October 19, while rain from Tropical Depression Obet could begin on Friday, October 21

MANILA, Philippines – Tropical Depression Obet is still too far to directly affect the country, but the shear line is bringing rain to parts of Northern Luzon on Wednesday, October 19.

In an advisory at 11 am on Wednesday, the Philippine Atmospheric, Geophysical, and Astronomical Services Administration (PAGASA) said the shear line will trigger moderate to heavy rain in these provinces:

The shear line is the point where the northeasterly surface windflow and the easterlies meet.

Meanwhile, in a press conference past 11 am, the weather bureau said Obet was last spotted 1,025 kilometers east of extreme Northern Luzon, moving north northwest at a slightly faster 15 kilometers per hour from the previous 10 km/h.

As of Wednesday morning, Obet continued to have maximum sustained winds of 45 km/h and gustiness of up to 55 km/h. But it may strengthen into a tropical storm by late Friday or early Saturday.

The weather bureau’s updated rainfall forecast indicates rain from Obet could begin early Friday. Areas to be affected must watch out for floods and landslides.

Northern Luzon is still reeling from the effects of Neneng (Nesat), which made landfall in Cagayan province’s Calayan Island as a severe tropical storm last Sunday, October 16, then left the Philippine Area of Responsibility (PAR) as a typhoon.

In terms of winds, tropical cyclone wind signals may be raised for some areas in Northern Luzon starting Wednesday evening or Thursday morning, October 20.

Even before the raising of wind signals, however, the northeasterly surface windflow is already bringing strong to gale-force winds to the following areas on Wednesday:

A gale warning has also been in effect since 5 am on Wednesday due to the surge of the northeasterly surface windflow. Rough to very rough seas are expected in these seaboards: