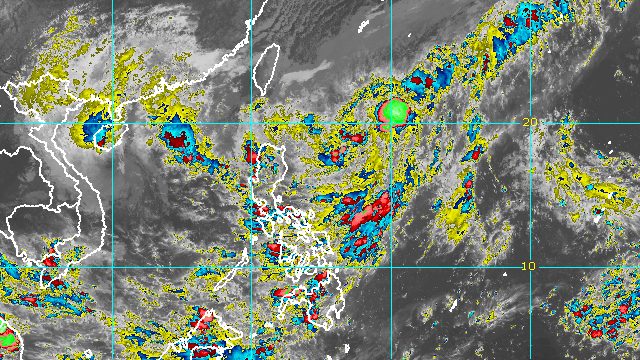 MANILA, Philippines – Tropical Depression Obet slowed down on Wednesday afternoon, October 19, moving at just 10 kilometers per hour over the Philippine Sea. It was earlier moving at 15 km/h.

The tropical depression shifted west southwest, a direction it is expected to maintain until early Friday morning, October 21, before it turns west toward Northern Luzon or the Luzon Strait.

It remains expected to cross extreme Northern Luzon or the northern part of mainland Northern Luzon between Friday evening and Saturday morning, October 22.

Obet still had maximum sustained winds of 45 km/h and gustiness of up to 55 km/h on Wednesday afternoon. But it may strengthen into a tropical storm by late Friday or early Saturday.

The weather bureau maintained the following rainfall forecast for Obet:

PAGASA also warned that the shear line may continue to bring scattered rain showers and thunderstorms to these areas on Wednesday evening:

The shear line is the point where the northeasterly surface windflow and the easterlies meet.

Floods and landslides are possible in areas affected by the shear line and areas to be affected by Obet.

Also due to the surge of the northeasterly surface windflow, PAGASA issued a new gale warning at 5 pm on Wednesday. Rough to very rough seas are expected in these seaboards:

Based on Obet’s latest forecast track, it could leave PAR on Saturday afternoon.

Obet is the country’s 15th tropical cyclone for 2022 and the third for October.