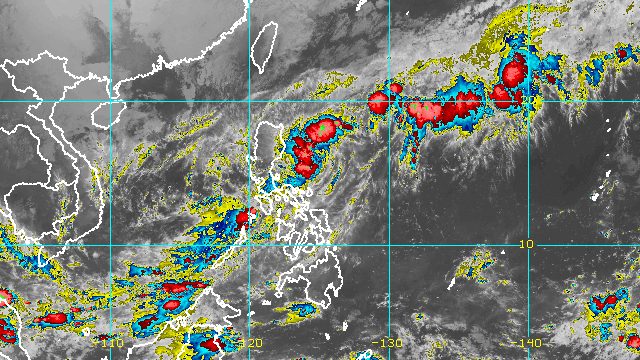 ROSAL. Satellite image of Tropical Depression Rosal as of December 11, 2022, 5 am.

MANILA, Philippines – Tropical Depression Rosal continued to move away from land in the early hours of Sunday, December 11, with only the region of Mimaropa still seeing rain.

Rosal was already 330 kilometers east of Casiguran, Aurora, the Philippine Atmospheric, Geophysical, and Astronomical Services Administration (PAGASA) said in its 5 am bulletin on Sunday.

It maintained its strength, with maximum sustained winds of 45 km/h and gustiness of up to 55 km/h.

Rosal is still not expected to make landfall in the Philippines. It is projected to move generally northeast from Sunday to Monday morning, December 12, before turning east southeast.

While the tropical depression keeps moving away, Mimaropa will still have light to moderate rain, with at times heavy rain, until Sunday noon. PAGASA warned that floods and landslides remain possible.

Signal No. 1 raised due to Rosal had already been lifted on Saturday evening.

But the weather bureau said there may be occasional gusts due to the surge of the northeast monsoon or hanging amihan, partly enhanced by Rosal, in the following areas:

Also due to the surge of the northeast monsoon, PAGASA issued a new gale warning at 5 am on Sunday, covering these seaboards:

The surge of the northeast monsoon and the tropical depression combined may also cause moderate to rough seas, with waves 1.5 to 3.5 meters high, in the seaboards of Central Luzon as well as the eastern and western seaboards of Southern Luzon. Travel may be risky for small vessels.

PAGASA said Rosal may still intensify into a low-end tropical storm within 36 hours.

But cold air from the monsoon surge would mean “increasingly unfavorable conditions” for Rosal by late Monday or early Tuesday, December 13, and it may start weakening. Tropical cyclones are fueled by warm air.

PAGASA said Rosal “may become a post-tropical low embedded along the leading edge of the monsoon surge” by Wednesday, December 14.