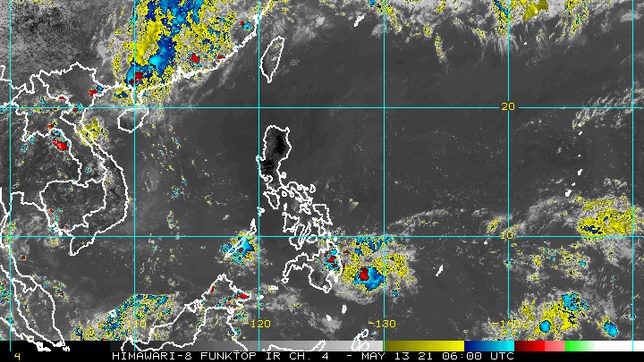 Tropical Storm Crising accelerated while heading for the provinces of Davao Oriental and Surigao del Sur in Mindanao early Thursday afternoon, May 13.

The tropical storm is moving west northwest at 25 kilometers per hour, more than double its previous speed of 10 km/h.

It maintained its strength, with maximum sustained winds of 65 km/h and gustiness of up to 80 km/h.

As Crising approaches, more areas have been placed under tropical cyclone wind signals as of 2 pm on Thursday.

The state weather bureau also maintained its rainfall forecast for Crising, warning that it could cause isolated to scattered floods and landslides between Thursday and Friday morning, May 14.

As for coastal conditions, moderate to rough waters are expected in the eastern seaboard of Mindanao for the next 24 hours, with waves 1.2 to 3 meters high.

Though it may strengthen a bit, Crising is forecast to maintain its tropical storm status as it hits land, according to PAGASA.

It will gradually lose strength as it crosses Mindanao’s rugged landmass on Friday, however, and could weaken into a tropical depression.

The state weather bureau expects Crising to emerge over the Sulu Sea early Saturday morning, May 15, then weaken further into a remnant low early Sunday morning, May 16, as it crosses Palawan. Shortly after that, it could dissipate. (READ: FAST FACTS: Tropical cyclones, rainfall advisories)