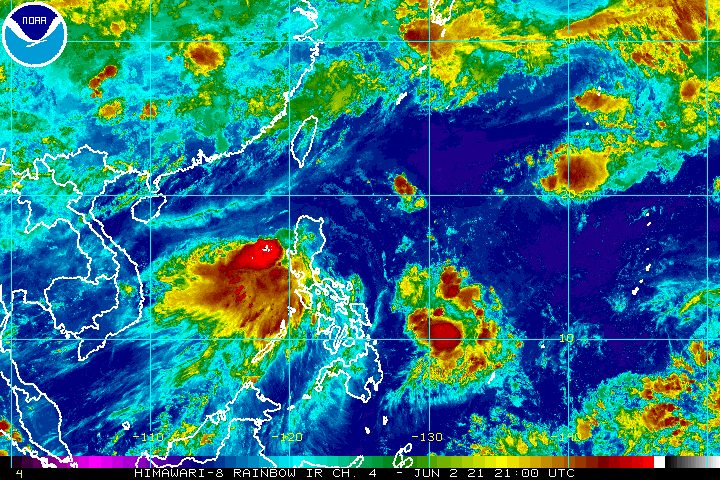 In a briefing past 5 am on Thursday, the Philippine Atmospheric, Geophysical, and Astronomical Services Administration (PAGASA) said Dante was already over the coastal waters of Santa Cruz, Zambales.

The tropical storm accelerated in the early hours of Thursday and is now moving north northwest at 25 kilometers per hour (km/h).

PAGASA said Dante will continue moving north northwest over the coastal waters of Zambales and Pangasinan, then shift more to the north over the West Philippine Sea.

Then it could turn northeast on Friday morning, June 4, moving over the Bashi Channel in the Luzon Strait near Taiwan’s southern coast.

Dante again maintained its strength early Thursday, with maximum sustained winds of 65 km/h and gustiness of up to 90 km/h.

But PAGASA said Dante is likely to weaken into a tropical depression in the next 12 hours – Thursday morning or afternoon – and into a remnant low by Saturday morning, June 5. (READ: FAST FACTS: Tropical cyclones, rainfall advisories)

Parts of Luzon will still have rain from Dante on Thursday. PAGASA noted that there remains the risk of scattered floods, which may become widespread in areas that have already seen significant rain in the past few days. Landslides are also possible.

But with Dante moving over water, there are considerably fewer areas under tropical cyclone wind signals as of 5 am on Thursday.

Dante is also continuing to trigger moderate to very rough seas in parts of Luzon on Thursday.

Meanwhile, the low pressure area (LPA) that PAGASA has been monitoring entered the Philippine Area of Responsibility (PAR) at 2 am on Thursday.

The LPA was last spotted 1,135 kilometers east of Southern Luzon. It is still too far to affect the country.

Estareja said the LPA only has a slim chance of becoming a tropical cyclone, so far.

The state weather bureau is expected to declare the onset of the rainy season and the southwest monsoon or hanging habagat within the first half of June. – Rappler.com