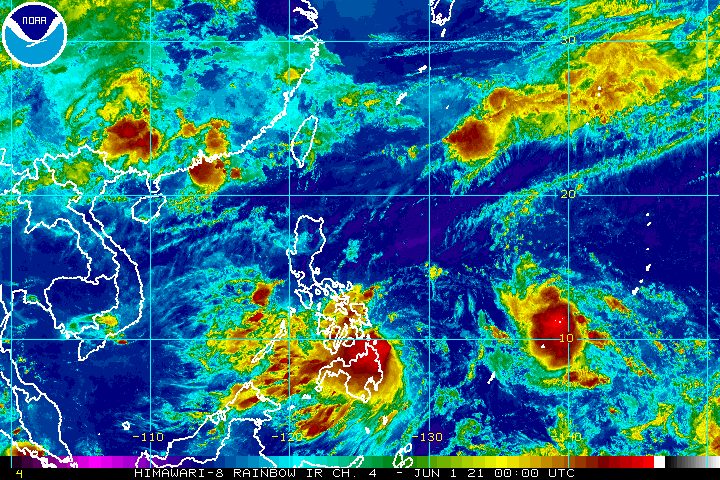 The Philippine Atmospheric, Geophysical, and Astronomical Services Administration (PAGASA) said in its 8 am bulletin on Tuesday, June 1, that Dante was already 270 kilometers east of Maasin City, Southern Leyte.

The tropical storm is moving at the same pace of 20 kilometers per hour (km/h), but it shifted from northwest to west northwest.

Due to the shift, Dante could make its initial landfall in Eastern Samar or Leyte between Tuesday afternoon and evening.

But PAGASA also noted that due to Dante’s movement early Tuesday, there is an “increasing likelihood” of the tropical storm heading more west northwest or west in the near term. If that happens, its initial landfall could be in Leyte or in the Dinagat Islands-Siargao Island area.

As of early Tuesday morning, Dante maintained maximum sustained winds of 75 km/h and gustiness of up to 90 km/h.

PAGASA said Dante could slightly intensify before landfall, but it may now remain a tropical storm instead of possibly strengthening into a severe tropical storm.

More areas in Luzon, the Visayas, and Mindanao were placed under tropical cyclone wind signals as of 8 am on Tuesday.

The state weather bureau also updated its rainfall forecast for Dante, now warning that the rain could become intense at times in some areas. Here is the forecast covering Tuesday until Wednesday morning, June 2:

Meanwhile, PAGASA maintained its forecast for coastal waters on Tuesday.

Dante, the country’s fourth tropical cyclone for 2021, could leave the Philippine Area of Responsibility (PAR) on Saturday, June 5.

PAGASA is expected to declare the onset of the rainy season and the southwest monsoon or hanging habagat in the first half of June. – Rappler.com