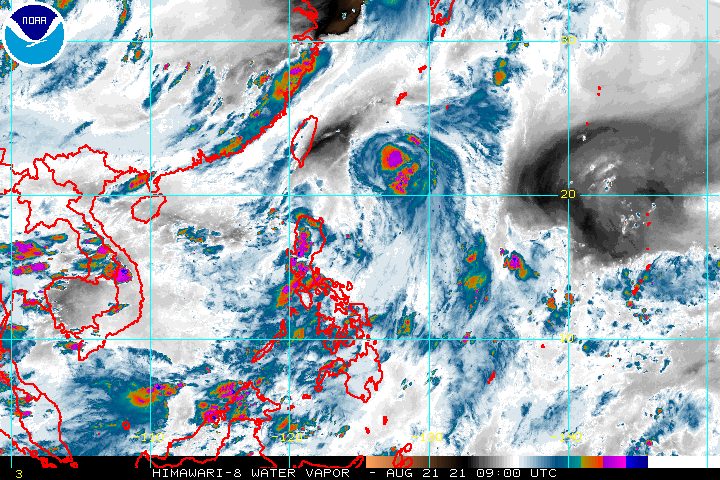 The intertropical convergence zone (ITCZ) was affecting Southern Luzon and parts of the Visayas and Mindanao on Saturday, August 21, while Tropical Storm Isang (Omais) strengthened further over the Philippine Sea.

The ITCZ is a belt near the equator where the trade winds of the Northern Hemisphere and Southern Hemisphere meet, usually causing low pressure areas or thunderstorms. (READ: FAST FACTS: Tropical cyclones, rainfall advisories)

The Philippine Atmospheric, Geophysical, and Astronomical Services Administration (PAGASA) said in a bulletin on Saturday afternoon that scattered rain showers and thunderstorms were being experienced in these regions:

The tropical storm is not affecting any part of the Philippines.

PAGASA said Isang is still expected to stay far from the country’s landmass. It is likely to maintain its northwest direction for the rest of Saturday until Sunday morning, August 22, then turn north northwest on Sunday afternoon over the East China Sea.

Isang is projected to exit the Philippine Area of Responsibility (PAR) on Sunday morning or afternoon.

As of Saturday afternoon, Isang’s maximum sustained winds had reached 85 km/h while its gustiness was up to 105 km/h.

By Monday morning, August 23, Isang could start to weaken outside PAR.