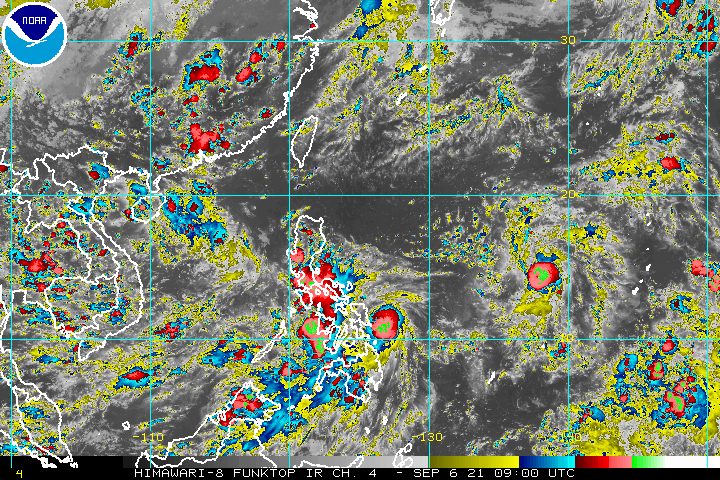 JOLINA. Satellite image of Tropical Storm Jolina (Conson) as of September 6, 2021, 5 pm. There is also a tropical depression outside the Philippine Area of Responsibility.

Facebook Twitter Copy URL
Copied
Signal Nos. 1 and 2 are raised in parts of the Philippines due to Tropical Storm Jolina (Conson) on Monday afternoon, September 6

Jolina intensified from a tropical depression into a tropical storm at 2 pm on Monday, September 6, and was given the international name Conson.

Jolina now has maximum sustained winds of 75 kilometers per hour and gustiness of up to 90 km/h, the Philippine Atmospheric, Geophysical, and Astronomical Services Administration (PAGASA) said in a bulletin released past 5 pm on Monday.

It previously had maximum sustained winds of 55 km/h and gustiness of up to 70 km/h.

PAGASA said Jolina may continue to strengthen over the Philippine Sea and reach its peak intensity of 85 km/h, referring to maximum sustained winds, by Wednesday, September 8.

The tropical storm is moving west northwest at a slightly faster 20 km/h from the previous 15 km/h.

Here is the updated rainfall forecast for Jolina, covering the next 24 hours:

PAGASA again warned that isolated to scattered flash floods and landslides could occur.

With Jolina becoming a tropical storm, Signal No. 2 has been declared and more areas have been placed under Signal No. 1. Below is the complete list of areas under tropical cyclone wind signals as of 5 pm on Monday.

Signal No. 2 (strong to gale-force winds)

Jolina will also continue to cause moderate to rough seas in the eastern seaboards of the Visayas and Mindanao in the next 24 hours. Small vessels should take precautionary measures, with waves 1.2 to 2.8 meters high.

Then the tropical storm could cross the Northern Luzon-Central Luzon area and emerge over the West Philippine Sea by Thursday evening. At this point, it may slightly weaken due to the rugged terrain.

The state weather bureau noted, however, that Jolina might make landfall in Eastern Samar or Northern Samar if its track shifts toward the west.

Jolina is likely to leave the Philippine Area of Responsibility (PAR) by Friday morning, September 10.

Aside from Jolina, PAGASA is still monitoring a tropical depression outside PAR.

It slightly intensified and now has maximum sustained winds of 55 km/h and gustiness of up to 70 km/h.

PAGASA earlier said this tropical depression may enter PAR on Wednesday morning, but it is not projected to make landfall. If it enters, it would be given the local name Kiko. (READ: FAST FACTS: Tropical cyclones, rainfall advisories)