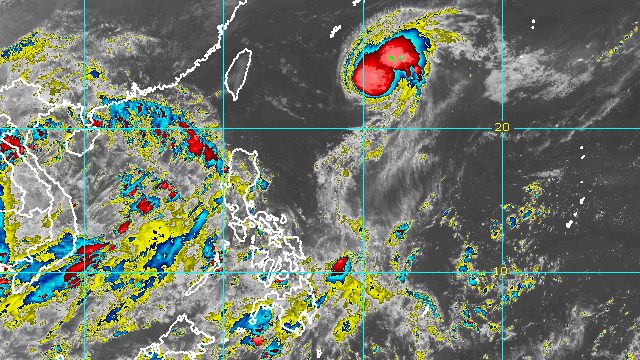 MANILA, Philippines – Luis strengthened from a tropical depression into a tropical storm while moving over the Philippine Sea on Wednesday evening, September 28.

It now has the international name Roke.

The Philippine Atmospheric, Geophysical, and Astronomical Services Administration (PAGASA) said in its 11 pm bulletin on Wednesday that Luis’ maximum sustained winds increased from 55 kilometers per hour to 65 km/h. Its gustiness is now up to 80 km/h from the previous 70 km/h.

Luis will remain far from Philippine landmass. There are no rainfall warnings, tropical cyclone wind signals, or warnings for the country’s coastal waters.

The tropical storm is expected to leave the Philippine Area of Responsibility on Thursday morning, September 29, just a day after developing inside PAR.

It may intensify further while moving over the sea east of Japan’s Ryukyu Islands, according to PAGASA.

Luis is the Philippines’ 12th tropical cyclone for 2022 and the fourth for September.

Meanwhile, the effects of the low pressure area (LPA) inside PAR and the southwest monsoon or hanging habagat have weakened, PAGASA said in a separate advisory at 11 pm on Wednesday.

The LPA was located 360 kilometers southeast of Borongan City, Eastern Samar, or 250 kilometers east southeast of Surigao City, Surigao del Norte. It may dissipate within 24 hours or by Thursday.

The southwest monsoon, affecting the western parts of Central Luzon and Southern Luzon, is also weakening.

But PAGASA noted that scattered rain showers and thunderstorms may still occur in Eastern Visayas and Caraga due to the LPA, and in Pangasinan, Zambales, and Bataan due to the southwest monsoon. – Rappler.com