Intense rain ahead, Signal No. 2 up due to Tropical Storm Maring 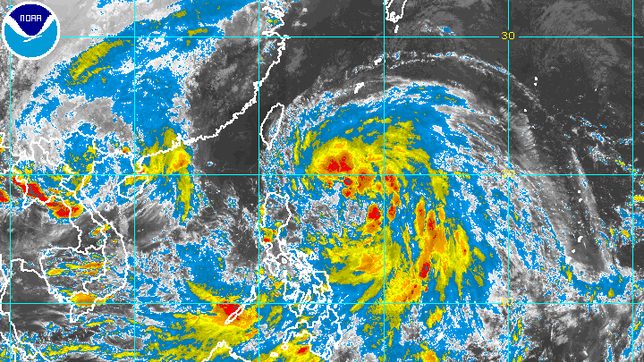 The weather bureau warned on Sunday afternoon, October 10, that rain could become intense due to Tropical Storm Maring (Kompasu).

Signal No. 2, referring to damaging winds, was also raised for the first time at 5 pm on Sunday.

The tropical storm shifted west northwest and slowed down, moving at 20 kilometers per hour from the previous 30 km/h.

It continues to have maximum sustained winds of 85 km/h and gustiness of up to 105 km/h.

The southwesterlies enhanced by Maring may also bring rain to these areas:

PAGASA warned areas affected by the tropical storm and the enhanced southwesterlies to watch out for scattered to widespread floods and landslides.

The rest of the country, including Metro Manila, will only have localized thunderstorms.

Meanwhile, here are the areas under tropical cyclone wind signals as of 5 pm on Sunday:

There are no more areas in Mindanao under a tropical cyclone wind signal.

Occasional gusts also remain possible in coastal and mountainous areas of the regions below. This is due to Maring’s “expansive wind field” and “the enhancement of the southwesterlies and northeasterlies,” said PAGASA.

A gale warning was issued at 5 pm on Sunday for the eastern seaboards of Central Luzon and Southern Luzon as well as the northern coast of Northern Samar. Maring is causing rough to very rough waters, with waves 2.8 to 4.5 meters high.

In the remaining seaboards of Luzon and the Visayas and in the northern and eastern seaboards of Mindanao, waters remain moderate to rough. Travel is risky for small vessels.

Maring is seen to maintain its west northwest direction until the early hours of Monday, before it turns west toward extreme Northern Luzon.

It could then move over the Luzon Strait and pass close to or over the Babuyan Islands between Monday afternoon and early Tuesday morning, October 12.

But the weather bureau reiterated it is not yet ruling out the possibility of Maring making landfall in mainland Luzon.

Maring is likely to leave the Philippine Area of Responsibility (PAR) on Tuesday morning or afternoon.

On Sunday morning, Maring had completed its merger with the remnant low that was formerly Tropical Depression Nando. The two tropical cyclones had interacted over the Philippine Sea, resulting in the merger.