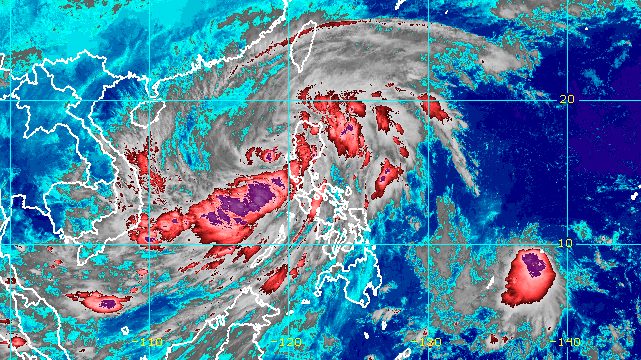 TROPICAL CYCLONES. Satellite image of Tropical Storm Paeng (Nalgae), and a tropical depression outside the Philippine Area of Responsibility, as of October 30, 2022, 5 am.

Facebook Twitter Copy URL
Copied
Parts of Luzon and Western Visayas may still see rain from Tropical Storm Paeng (Nalgae) on Sunday morning, October 30, though the intensity of the rainfall is easing

MANILA, Philippines – Tropical Storm Paeng (Nalgae) left the landmass of Luzon at 2 am on Sunday, October 30, and is already over the West Philippine Sea.

Paeng was last spotted 85 kilometers west northwest of Iba, Zambales, said the Philippine Atmospheric, Geophysical, and Astronomical Services Administration (PAGASA) in a bulletin issued at 5 am on Sunday.

The tropical storm accelerated further, moving west northwest at 30 kilometers per hour from the previous 25 km/h.

It is seen to exit the Philippine Area of Responsibility (PAR) on Monday morning or afternoon, October 31.

Paeng still had maximum sustained winds of 85 km/h early Sunday, while its gustiness was down to 105 km/h. But over the West Philippine Sea, it could re-intensify into a severe tropical storm within 24 hours.

Paeng may also become a typhoon by late Monday evening or on Tuesday morning, November 1, while outside PAR, but it may start weakening again late Tuesday due to another surge of the northeast monsoon or hanging amihan.

Much of Luzon may still see rain from Paeng on Sunday morning, though the intensity of the rainfall is easing.

Meanwhile, some areas remain under tropical cyclone wind signals as of 5 am on Sunday:

There are no more storm surge warnings due to Paeng.

But PAGASA issued a new gale warning at 5 am on Sunday, covering these seaboards:

It made landfall five times, all on Saturday, October 29:

The tropical depression was located 1,385 kilometers east of northeastern Mindanao before dawn on Sunday, moving west northwest at 10 km/h after being almost stationary.

PAGASA said the tropical depression may enter PAR on Monday morning, and would be given the local name Queenie.

It is projected to remain a tropical depression until Tuesday, and may weaken into a remnant low on Wednesday, November 2.

PAGASA Weather Specialist Benison Estareja explained that sea conditions will not be as favorable for the tropical depression since Paeng already moved over the same area of the Philippine Sea, reducing the moisture there.

The trough or extension of the new weather system, however, could bring some rain. Updates are expected in the coming days.