Tropical Storm Ulysses slows down, more areas under Signal No. 1 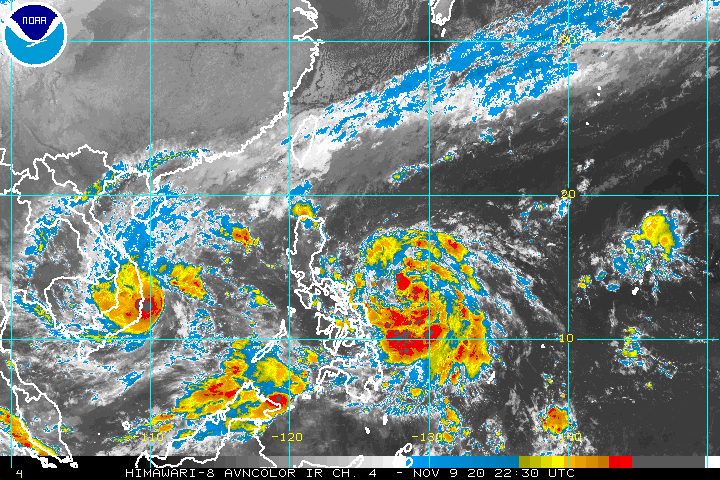 More parts of Bicol, Eastern Visayas, and Calabarzon were placed under Signal No. 1 before dawn on Tuesday, November 10, due to the slower Tropical Storm Ulysses (Vamco).

The Philippine Atmospheric, Geophysical, and Astronomical Services Administration (PAGASA) said in its 5 am bulletin on Tuesday that Ulysses is now 555 kilometers east of Virac, Catanduanes, slowly moving northwest.

The tropical storm continues to have maximum sustained winds of 65 kilometers per hour (km/h) and gustiness of up to 80 km/h. (READ: FAST FACTS: Tropical cyclones, rainfall advisories)

Below are the areas under Signal No. 1 as of 5 am on Tuesday. These areas should watch out for “strong breeze to near gale conditions.”

Light to moderate rain from Ulysses, as well as the tail-end of a cold front, will be experienced on Tuesday. The rain may be heavy at times, so the public must be on alert for possible floods and landslides.

PAGASA said Ulysses may intensify into a severe tropical storm on Tuesday evening, then into a typhoon by Wednesday morning, November 11.

As a typhoon, it may reach its peak intensity of 140 to 155 km/h on Wednesday afternoon or evening.

“Landfall at or near peak intensity is highly likely,” warned PAGASA.

There are still two scenarios for Ulysses’ landfall.

The first is that it could make landfall in Quezon on Thursday morning, November 12, after going very near two provinces in the region of Bicol – Catanduanes on Wednesday afternoon and Camarines Norte on Wednesday evening.

The second is that it may make landfall in Bicol on Wednesday afternoon or evening. There is an “increasing likelihood” of this happening, according to PAGASA, due to the “slight shift” in Ulysses’ projected track.

Catanduanes was severely affected by Super Typhoon Rolly (Goni) just over a week ago, and now faces another threat.

The state weather bureau said more areas will be included under Signal No. 1 in its next bulletin at 11 am on Tuesday. As early as Tuesday evening, Signal No. 2 may also be raised in parts of Bicol.