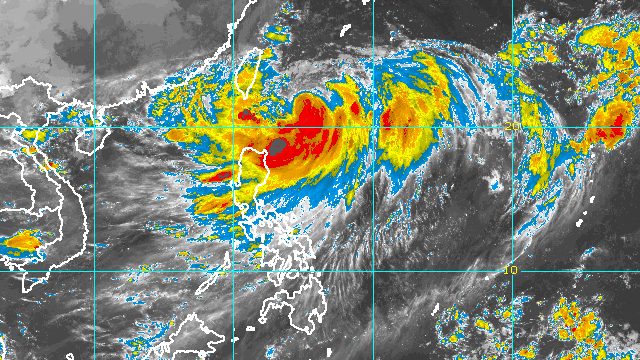 MANILA, Philippines – Henry (Hinnamnor) weakened from a super typhoon into a typhoon and became almost stationary over the Philippine Sea before dawn on Friday, September 2.

In its 5 am bulletin on Friday, the Philippine Atmospheric, Geophysical, and Astronomical Services Administration (PAGASA) said Henry’s maximum sustained winds slightly decreased from 185 kilometers per hour to 175 km/h, thus the downgrade to typhoon category. Its gustiness went down from 230 km/h to 215 km/h.

As of early Friday, Henry was located 395 kilometers east northeast of Basco, Batanes, barely moving in that area. The weather bureau said the typhoon will remain almost stationary on Friday morning, before slowly heading northwest in the afternoon.

Henry will not make landfall, but it is bringing heavy rain and strong winds to parts of Northern Luzon.

In terms of winds, these are the areas under Signal No. 1 as of 5 am on Friday:

Strong winds are expected in areas under Signal No. 1. PAGASA may also raise Signal No. 2 later on.

Meanwhile, here is the weather bureau’s rainfall forecast for Henry as of 5 am:

Henry is also enhancing the southwest monsoon or hanging habagat. Estareja said monsoon rain is expected starting Friday until the weekend in much of Luzon, especially the western portion, and in Western Visayas.

Floods and landslides are possible in areas affected by the typhoon and the enhanced southwest monsoon.

A new gale warning was also issued at 5 am on Friday, covering the northern and eastern seaboards of Northern Luzon, particularly Batanes, Cagayan including Babuyan Islands, Isabela, and the northern coast of Ilocos Norte.

Moderate to rough seas may also be seen in the eastern seaboards of Central Luzon and Southern Luzon on Friday. Waves could be 1.2 to 3 meters high, making conditions risky for small vessels.

On Saturday, September 3, Henry is projected to accelerate northward. It could leave the Philippine Area of Responsibility (PAR) on Saturday evening or Sunday morning, September 4.

“A short period of intensification may also take place outside the PAR region by Sunday as Henry tracks northward over the East China Sea,” added PAGASA.